AS the food trade is being devastated by the runaway horsemeat scare, a round-table meeting on the crisis took place last Friday (15 February). 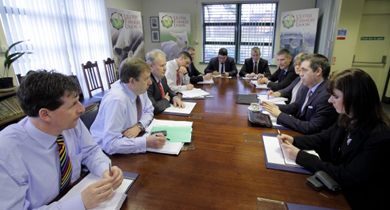 NIIRTA has held a meeting with the UFU to discus the horsemeat crisis.[/caption]

The Northern Ireland Independent Retail Trade Association (NIIRTA) has given its full support to the collective call by the Ulster Farmers Union and other key stakeholders for a Food Supply Summit to be jointly hosted by the First and deputy First Ministers.

Speaking after the meeting NIIRTA Chief Executive Glyn Roberts said: “This was a very constructive meeting at which we identified the need to ensure full consumer confidence in the produce they buy and the food supply chain as a whole. NIIRTA is focused on moving this situation forward and we need to step up engagement with Ministers and key stakeholders”

“We fully support the call for the First and deputy First Minsters to call a Food Supply Chain Summit to include the Ministers for DETI, DARD, DFP, DHSSPS as well as Food Standards Agency, retailers, processors, suppliers and farmers to chart an agreed way forward and to look at how we can give further support to our Agri-Food Sector”