<![CDATA[ <p style="text-align: justify;">The four Unionists on the Newry Mourne and Down District Council are at loggerheads with Sinn Fin over the call-in review process by Sinn Féin and over the use of the Irish language on Council logos and headed paper.

DUP Councillor Garth Craig explained: “Speaking as DUP Group Leader on the new Newry, Mourne and Down Council, the DUP were disappointed with the action of Sinn Fein regarding their decision to use the call-in procedure to stall progress on the agreement of the new Council name. Although the name Newry, Mourne and Down was not our choice, nevertheless, we were prepared to accept the democratic decision of the majority vote at the Council meeting, which voted in favour of that name.

“For Sinn Fein to suggest that the name Newry, Mourne and Down is a snub to the people of South Armagh by having no mention of their region in the name, doesn’t stack up, since their preferred name of ‘Newry City, Mourne and Gullion’ does not make any reference to a large part of the District to the north east of the Mournes i.e. Rowallane and Slieve Croob, and so it could be argued that this section of the District has been snubbed.

“We have always argued that it is a fruitless exercise to try and come up with a name that describes every part of the District. That’s why we went for ‘Mourne’ since it was central to the region, was an internationally recognised brand, and was easy to say and write.

“We still hope that agreement on a name can be found soon as it will not bode well for the future if this impasse lingers on. Certainly we in the DUP will be doing everything in our power to reach a consensus quickly on this important decision 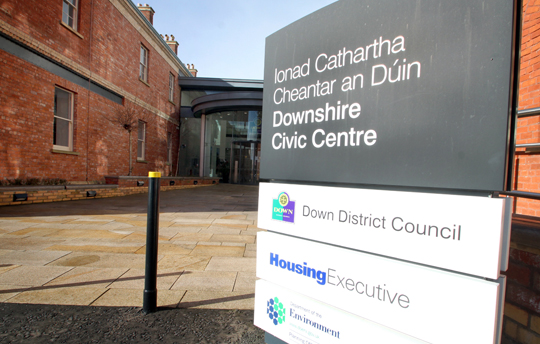 Responding to the news that Unionist councillors have requested to ‘call-in’ for consideration a council decision on the use of Irish, Mr O’Muiri said the language belongs to them as much as anyone else.

He added: “The announcement by the Unionist groupings on Newry, Mourne and Down District Council of their intention to use the ‘call-in’ procedure has disappointed many.

“Time and again I have told my fellow councillors of the need for mutual understanding and respect when dealing with bilingualism, time and again they have refused to listen.

“Through concerted efforts, the Unionist councillors have attempted to halt progress, to stifle growth, to regress to the politics of sectarianism. We, in Sinn Féin continue to work towards a situation where all citizens of Newry, Mourne and Down will appreciate the Irish language. Where is the leadership within Unionism in our district? Which councillor would support a constituent wishing to learn Irish?”

“In recent times, the East Belfast Mission has given a floor in the Skainos Centre to the promotion of the Irish language. They are currently running eight Irish classes each week. The Irish language development officer Linda Ervine speaks of a growing desire among Protestant, Unionist and loyalist people to learn Irish.

“How can things be so diametrically opposed in Newry, Mourne and Down? Why do these councillors feel that there is an attempt to ‘domineer and lord over a vulnerable minority?’ Why does Councillor Craig feel that the Bilingualism Policy of the Council exacerbates an unacceptable position?

“History shows us the significant extent of Unionist contributions to the revival of the Irish language in the 18th and 19th centuries. Perhaps the Unionist Councillors of Newry, Mourne and Down could learn a lot from their history.

“The Irish language is for everyone, owned by us all, and to be feared by no-one.”

Westminster election Alliance candidate Martyn Todd has also entered the fray over the use of Irish language in Newry Mourne and Down Council.

Mr Todd said: “There are two different issues mixed up in this debate. One is naming something in a way that is practical and productive and the other is the use of Gaelic in Northern Ireland.

“Firstly, the Alliance Party supports making it easier for everybody in Northern Ireland to learn the the Irish language. Whether the Gregory Campbells of NI can see it or not, Gaelic is an important part of everyone’s culture here. As well as giving us most of our place names, it has altered the way we think and speak in English. We all need to have a better feel for its impact on our joint and separate cultures and learning at least some of the language, ideally in all primary schools, would be a great help for that.

“However, I fear that putting the Irish Language language first in the logo and branding of the new council will hurt the new council’s stated priority of making South Down a premier tourism destination in Ireland. This will limit the growth of the local economy and future jobs for young people.

“Giving a name to a person, place or organisation is mostly for the benefit of other people, people outside the place or organisation. The name will succeed best where it means something to, or even appeals to, others. If Newry Mourne and Down want to achieve their stated aim of increasing tourism then they should be trying to attract visitors from their largest potential market, England, as well as from farther afield. The new name and logo must take this into account.

“Having lived for years in England and having English friends and relatives, I can assure you that a lot of English people will interpret putting Irish first as a clear message to them that they are not welcome in Newry, Mourne and Down. Most visitors outside these islands will speak at least some English. Only a very small minority will speak Irish.

“The new council has already failed to agree on a new name for itself that sends a message of one new entity making a fresh start. This failure has resulted in having to revert to the old name, which sends a message of partition (three separate areas included) and exclusion (other areas left out) from the start.

“If it persists in putting Irish first in all its logo and branding, it will be demonstrating by its actions that its words of attracting tourist are just words.

“Councillors are expected to take decisions and actions that are in the best interest of the whole of the council area, both for its economy and for the wellbeing of the greatest possible number of residents. By its actions on its name so far, the council is clearly failing in this primary duty,” added Mr Todd.