The dig, organised by the Northern Ireland Environment Agency (NIEA) and the Centre for Archaeological Fieldwork at Queens University Belfast, is shedding much light on the story of Dundrum Castle. The castle is believed to be around 800 years old, but the site was used for centuries before the stone castle was built. 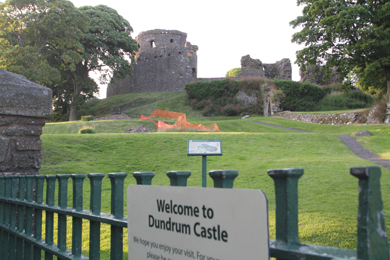 Discoveries unearthed include the impressive remains of what is believed to be a medieval lime kiln, very likely used when earliest parts of the castle were being built. The kiln had been partially collapsed and buried during later episodes of activity at the site.  The work is following on from and expanding on the excavations carried out with Time Team in 2012 and is set to conclude on the week ending 12 July.

A group of students from Queen’s University Belfast and volunteer members of the Ulster Archaeological Society are participating in the excavation process.  Alex Attwood said: “Dundrum Castle is in the state care of my Department and, with its magnificent views over Dundrum Bay to the Mourne Mountains, it is a testament to our wonderful Built and Natural heritage.

“New light has been shed on what existed at this important site before the coming of the Normans and adds to our knowledge of this historic site and its development over the centuries.

“It is important that we maximise the opportunity to unveil as much of our rich heritage as possible. This is why such archaeological digs are important and why I opened up the Crannog in Co Fermanagh to the public on several occasions and extended the dig there. The discoveries now being made at Dundrum Castle will further shape our understanding of the past, and enhance the visitor experience at the site.

“All of these provide important “snap shots” of the past and further enrich our fascinating history making them tourist magnets. The built and natural heritage will be the biggest part of future increases in tourist numbers and spend – an essential element of our economy and jobs,”  added Minister Attwood.

Welcoming the progress of the excavations, Alliance Councillor Patrick Clarke who lives in Dundrum said: “One of Ulster’s most impressive medieval structures, Dundrum Castle set high on a hill overlooking Dundrum Bay, is one of best kept historic built and natural tourism secrets. It has impressive panoramic views of Dundrum Bay, the Mournes and is an important part of our built heritage.

“Currently I am waiting on a response from Minister Atwood to my request on the possibility of floodlighting Dundrum Castle for visitors and tourists to see and experience from the outskirts of Dundrum.  I understand from his private office the Minister is awaiting further information.”

UFU Angered At Import Of 400 Tonnes Of Polish Beef

Check Out John Cooney’s Jersey Givaway For A Pound