<![CDATA[ <p style="text-align: justify;">The new state-of-the-art playpark in Crossgar which was opened in January 2014 at a total cost of £130,000 of public money, has been severely damaged in an arson attack. 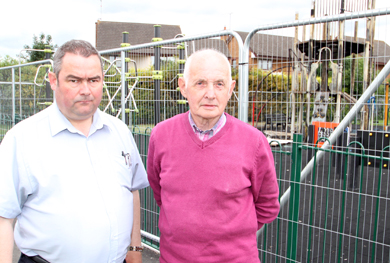 Fenced off: the Crossgar playpark is now out of bounds following a weekend fire which destroyed a substantial part of the facility. Pictured looking over the damage are Cllr Terry Andrews and Par Ward, DRAP board member.[/caption]

The central tower, the main feature, was set alight around 2am in the early hours of Saturday morning.

As yet the arsonists have not been apprehended but the police are continuing with their investigations and if anyone has any information about the incident, they are asked to phone the police non-emergency number on 101 and ask for the Downpatrick station.

Home owners adjacent to the playpark were concerned that the fierce blaze of burning plastics might spill over to their property and cause further damage.

South Down MP Margaret Ritchie (SDLP) has condemned an arson attack in Crossgar last night. The attack caused extensive damage to a play-park on Downpatrick Street. 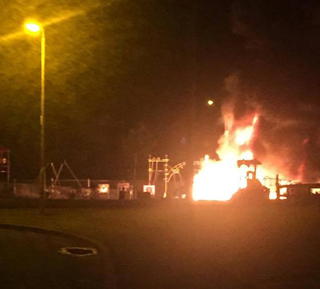 The intense fire in the Crossgar playpark began just before 2am early Saturday morning.[/caption]

“Those behind this attack either do not understand or care that local councils are running a tight budget and cannot easily afford to replace facilities such as the one they destroyed.

“This incident of mindless vandalism has carried a great cost for local children who will be deprived of active outdoor play until the play-park can be restored.

“I also call on the Council to ensure that it is not children who are punished by this contemptable act by ensuring that the play-park is repaired as soon as possible.”

Councillor Terry Andrews who lives just a short distance from the scene of the fire at the playpark in Crossgar said: “We have enjoyed excellent community relations in Crossgar in recent years and this act of arson will not deter our resolve to improve our community. This incident I understand was not sectarian despite its close proximity to the Twelfth day celebrations. 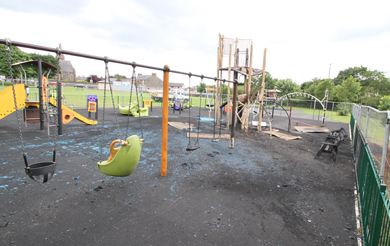 The scene of fire destruction in Crossgar.[/caption]

“This is is just sheer badness and stupidity. It has destroyed tens of thousands of equipment in the playground and it is even possible that the insurers may just write off the whole playpark which would be a disaster.

“We have spoken to the deputy chief executive at Newry Mourne and Down District Council and council officials have been on the scene and fenced the whole area of the playground off for safety reasons. Thankfully no-one was injured or work.

“This was a very intense fire and the main feature in the playpark, the tower, was completely destroyed along with park benches and fencing nearby. I’m sure other parts of the facility too including the safety ground covering will need to be replaced. I woke up this morning early and heard the news and I was just stunned.

“This is the first real casualty of all the playgrounds that were built with funding from the Down Rural Area Partnership, the old Down District Council, the NI Housing Executive and other agencies. It cost £130,000 and was a huge asset to our community. The children of the village and the local families are the losers here.

“We have a very strong sense of community spirit in Crossgar and we will bounce back from this. I will do everything in my power to ensure the playpark is reinstated.”

Paul Teggart, Chairman of the Crossgar Community Association, said that the fire damage to the playpark was “absolutely deplorable.” 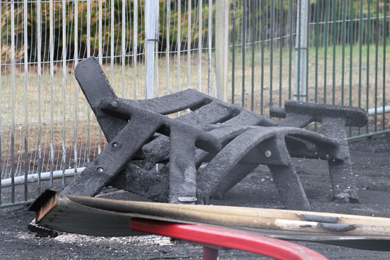 He said: “It was the Crosgar Community Association who lobbied to get the funding for the playpark and we are extremely disappointed that anyone could do such a thing. We have planned to put four new picnic tables next to the playpark very shortly but that now will all have to be shelved. This is all a huge loss to our community.

“It will take months to rectify. The damage is very substantial. The ground matting is very much destroyed. If anyone knows anything about the fire, please contact me in Crossgar, or telephone the police who are now investigating it. This must stop now before there is further damage or injury. Children now don’t have a playground at the start of their summer holidays. We fought long and hard to get the playground and it was destroyed in minutes. It is a tragedy, but we are determined not to be beaten by these vandals and will press the council to have it reinstated.”

Councillor Billy Walker who has already strongly spoken out against a number of fires in recent years in Killyleagh, has also condemned the arson attack in Crossgar and said: “This is so very sad as the children in the village of Crossgar are the ones losing out. They are the ones who are suffering.

“These people must be caught and given a custodial sentence to set an example to others who play with fire. They certainly need their fingers burned so to speak. We must stamp out this sort of behaviour. I supported this playpark development from the start and I’m just gutted for the people of Crossgar. We must do what we can to rectify the situation.” 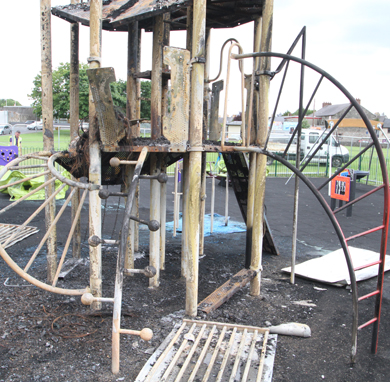 The climbing tower… destroyed by arson.[/caption]

He said he was “annoyed” that arsonists had targetted the popular playpark in the village and has called on anybody with information to come forward.

“This is a despicable act of vandalism on a very popular and much needed play facility in Crossgar.

“Whoever set the park ablaze obviously have little or no regard for local families or their local area.

“I hope the authorities can now carry out a speedy and thorough investigation so that we can bring the perpetrators to justice and the village can have the facilities restored as soon as possible.”

SDLP Group Leader on Newry, Mourne & Down Council has branded the act of vandalism on a Crossgar play park as “disgraceful”.

Commenting on the arson incident, Cllr Colin McGrath said: “The legacy council of Down District took time to liaise with local communities about their needs and they said they wanted state-of-the-art play facilities for their areas.

“This was delivered in a number of key locations in our district and this investment saw a fantastic play park located in Crossgar. To see it ruined in such an act of wanton vandalism is sad and the damage will cost many thousands of pounds to repair.

“I am heartened to see the resolve of local people to find out who carried out this act and to ensure they are held accountable. I would urge anyone with any information regarding this act of vandalism to inform the PSNI immediately.

“I also welcome the determination of the local community to have this play park repaired and returned to working order for local children. I have liaised with council officers today to ensure this process is undertaken as quickly as possible.”