<![CDATA[ <p style="text-align: justify;">The visible signs of a failing Northern Ireland government are beginning to clearly show says John McCallister, Independent Unionist MLA for South Down, as he recently expressed his deep concerns that the effects of Stormont’s inability to agree Welfare Reform and to implement the Stormont House Agreement are already starting to impact on the provision of core services.

Reacting to the Minister for Regional Development’s response, when asked in a written question, for his assessment of the economic impact of his reduced roads maintenance budget, Mr McCallister said: “Minister Kennedy’s response has given me cause for deep concern. In it he has detailed a number of core services provided by his Department that will not be sustainable due to his “skeleton service” and will therefore cease to be provided.

“Amongst these are pot-hole repairs, grass cutting, gully cleaning and street lighting. I have already received numerous complaints from constituents that sight lines at road junctions are being obscured by over-grown grass and foliage; verges are not being maintained and gullies remaining blocked. 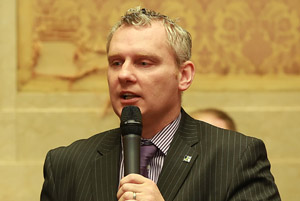 “Alarmingly, according to Mr Kennedy, tens of thousands of street lights are also likely to be out by the end of this year. This paints a very bleak picture indeed and quite rightly, people will be concerned about their personal safety during the winter months if urban streets are going to be in darkness.

“This is only one government Department and is just the start of the effects of our shambolic Executive hitting core services. If ever there was a demonstration as to why we need a proper form of government with collective responsibility this it,”  added Mr McCallister.

The written question from Mr McCallister to DRD Minister Danny Kennedy was seeking the Minister’s assessment of the economic impact of his reduced roads maintenance budget.

The full response from Minister Kennedy stated: “My Department is facing a £60 million resource budget pressure in 2015/16. As more than half of this falls to TransportNI, I have had no option other than to cut routine maintenance activities and introduce a skeleton service until the outcome of June monitoring is known.

“As well as impacts on service levels for activities such as pothole repairs, grass cutting, gully cleaning and street lighting repairs, there are underlying economic implications. With works orders not being issued to external contractors, there is a direct impact on jobs and investment in the construction industry.

“Roads are a valuable asset and they are main arteries for the economy. A reduction in maintenance in the short term will inevitably lead to longer-term deterioration and higher long-term repair costs. Reduced maintenance has also the potential to impact on public safety and increase public liability claims and hence costs. In addition, at skeleton service levels, tens of thousands of street lights are likely to be out by the end of this year. I have no doubt that this has the potential to impact on perceptions of safety and security and hence on the night-time economy.

“Whilst there are significant local economic impacts of not providing routine maintenance services, I have no doubt that the inability of the Executive to fund my Department to provide basic services reduces the attractiveness of Northern Ireland to both potential investors and tourists.”