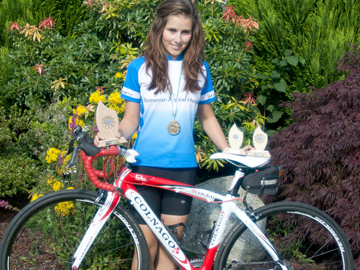 Hayley Priestley from Maghera is ready to break into the world level of ladies’ cycling.[/caption]

At the start of 2013 Hayley moved up into the Junior Ladies category and has since participated in eight open road races in Northern Ireland taking first place in five of the races, and second place in two and fourth in one.  This is a tremendous  performance as this is her first year competing at adult level.

In recognition of her cycling ability, Cycling Ireland has selected Hayley along with another girl to represent Ireland in the World Track Championships in Glasgow in August.

Leading up to these World Track Championships, Cycling Ireland organised a summer training programme. In preparation for the main aspect of this training programme Hayley attended along with other selected male and female cyclists a track training camp at the Chris Hoy Velodrome in Glasgow for a week in late June. There she met some of her cycling heroes such as Bradley Wiggins and Mark Cavendish. The main summer programme consists of specific track training and road events over a four and a half week period in Belgium for the male and female team preparing for the World Track Championships.

Hayley left for the Belgium training camp on 12 July and on 5 August she travels directly to Glasgow for the World Track Championship.  During this period, those attending the Belgium camp got the opportunity of attending one of the stages of the Tour de France. 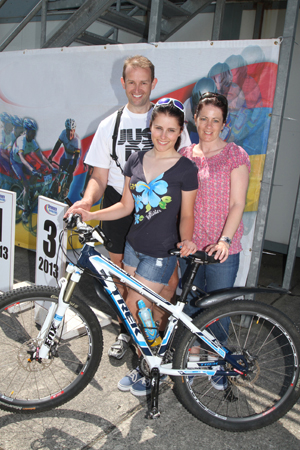 Team Priestley. Robin and Tracey Priestley with their daughter Hayley who continues to improve at international level in ladies’ cycling.[/caption]

Hayley said: “I would like to thank all my friends at La Lanterne Rouge Cycling Club for their great support and in particular Seamus Downey for his continuous help and support both as coach and as a family friend. Also I’d like too to thank Team Vision Racing which has shown great support over the last year and through all those harsh winter training runs. A big thanks also goes to ‘Team Priestley’ especially my  mother Tracey and my coach and father Robin Priestley.

“Also I’d like to send a special note of congratulations to Mark Downey from Dromore in Co.Down who will join me at the world track Championships and training camps leading up to the main event. I am looking forward to the competitive challenges that lie ahead.

“The trip to Belgium where I am at the present moment is just brilliant and is helping me get my cycling up a few notches.  I am really looking forward to the event in Glasgow. It would be great to bring a trophy back to Northern Ireland and I’ll certainly be doing my very best to do so.”

Speaking about the program, Cycling Ireland CEO Geoff Liffey said: “It is pleasing to see a strong competitive squad take on a challenging summer program which should provide a great experience for all those involved.

“The overall aims of the program are to educate and develop the riders across cycling disciplines to reach their full future potential. The riders are attending these intensive training camps across Europe to ensure that they perform to their best at the targeted events. This will provide them with a strong foundation to move along the development pathway into the U-23 ranks”.

Hayley added: “This is a great opportunity for me to achieve my full potential. I am really proud that  Lanterne Rouge Cycling Club are right behind me hoping that  in a short space of time I’ll be competing in the top ladies cycling events in the World.

“I have the chance of competing in the Road World Championships this year as the short list for this event will be announced on 20 August, two days after the Irish Junior Nationals so I am keeping my fingers crossed.”

Glasgow’s Sir Chris Hoy’s Velodrome ​will host the 2013 UCI Juniors Track World Championships. Competing over five days from 7-11 August, the future stars of track cycling will take to the circuit that will host track cycling during the Glasgow 2014 Commonwealth Games.

Riders will battle for world titles across a range of race disciplines at the Glasgow event at speeds in excess of 85 kilometres per hour and somewhere up from will be Hayley Priestley hoping to bring the honours back to her local club, La Lanterne Rouge.