<![CDATA[ <p style="text-align: justify;">Following the South Eastern Health and Social Care Trust’s decision to reduce A&E hours at the Downe and Lagan Valley hospitals, the UK Indepennce Party (UKIP) has now called for an independent investigation after a major incident being was declared at the RVH last Wednesday night. 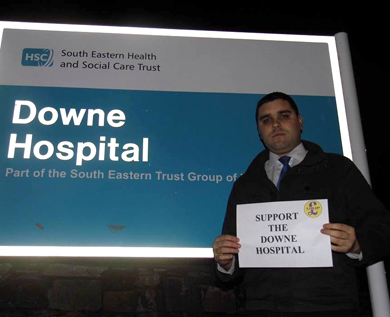 “Any sensible individual can see cutting services at the Ulster removing overnight  services from Downe and Lagan Valley will lead to increased usage of the only other nearest available A&E department. It is clear that centralised week-night and weekend accident and emergency services are going to work… it will have and is having serious repercussions.

“What the Department of Health and the health trust are effectively asking people to do is kindly schedule accident and emergencies during working hours. NHS care is being diminished in Northern Ireland. If there was a car accident or some other form of unexpected fatality in Downe or Lagan Valley this weekend, would the RVH be pushed into major incident mode again? The time has come for the Soith eqstern Trust  and the Health Department to treat this situation as serious.

When the decision was took to curtail A&E services at the Downe and Lagan valley there was no consultation with the local community or GP’s this was a major failing and evidence that the trust was intent on doing what it wanted wether the community agreed or not. I and my party colleges in Lagan Valley must commend the community effort and response opposing the closure.  Here in Down district a Facebook page “Support the Downe” has already received 5,896 likes in this past few weeks, Evidence of the wide spread community support and reliance on Downe Hospital.

“There is an understandable fear that there is a policy of confusion, as nobody knows  what services are available or when they will then be deemed unviable and lifted completely. This cannot be allowed to happen. I have been inundated with texts and calls from the public who are understandably annoyed about cuts to Downe A&E.”