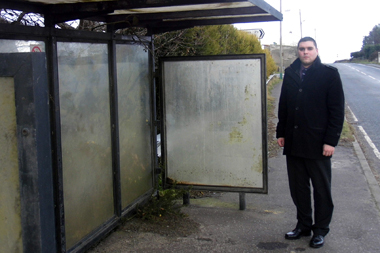 UKIP representative Alan Lewis calls for improvements to bus shelters across Down District.[/caption]

The UK Independence Party’s (UKIP) Down  representative Alan Lewis has called for action to be taken to address a shortage of bus shelters in the Down District Council area.

Mr Lewis said: “I have contacted Down Council’s Building and Estates’ Department  requesting repairs to Aughlisnafin bus shelter.  There are a list of shelters which need urgent repair in the area and currently  more than ten  locations across Down District awaiting the provision of a bus shelter. At present, the Council is only providing a small number of shelters per year.

“I suggest putting the provision of bus shelters out to tender. Businesses could then build the shelter at their own cost and recoup the cost by selling advertising. Bus shelters would be provided more quickly and maintained more efficiently and hard pressed ratepayers across Down would save money on the installation and maintenance of these badly needed facilities.”