<![CDATA[ <p style="text-align: justify;">MARGARET Ferguson of The Lakeside Inn at Ballydugan, County Down, is the toast of Downpatrick after being crowned joint winner of Northern Ireland’s Best Barperson at the prestigious Pubs of Ulster’s Pub of the Year Awards 2013. 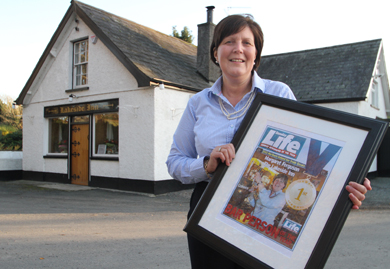 Margaret Ferguson pictured outside the Lakeside Inn after receiving her award from the Pubs of Ulster.[/caption]

At the event at the four star La Mon Hotel on Wednesday 13 November 2013, Margaret said she was “not hopeful” given the many larger businesses represented.

However, history was made when for the first time, the judges were truly impressed by two entrants and were split and decided to award the top gong jointly to the two finalists, Margaret Ferguson from the Lakeside Inn and Maggie McGaughey of the The Front Page, Ballymena for the Best Barperson category.

The finalists had to run the gauntlet of  written nominations through The Sunday Life newspaper, a mystery shop of their premises and a subsequent long interview.

Commenting on the historic win, the judges said:  “It came down to two people and we could not choose one over the other as the winner. So we are awarding two exceptional people who are really deserving of this award. Huge Congratulations to them both.”

Speaking after the event about being recognised as the (joint) winner of the Best Barperson Award, Margaret Ferguson said: “I am absolutely delighted to bring the Best Barperson title back to The Lakeside Inn.  I am lucky to be doing a job I really enjoy, and to be recognised for this at the prestigious Pub of the Year Awards is a real honour.

“We are a family run business and together we work hard to ensure our customers feel they have a home from home at The Lakeside Inn. I feel I should share this award with all my husband, Geoffrey and daughter, Anna who work alongside me at The Lakeside… without them this award win would not have been possible. Anna is studying medicine and loves to come back and get involved in the bar.

“I still find it hard to believe I’m a winner and I’ve been overwhelmed by the calls and cards so kindly sent by our patrons – I am so pleased for my customers, as they are so supportive to us and The Lakeside Inn all year round.

“It’s wonderful that a country pub has been recognised on a national level such as this and I hope our success will inspire other country pubs to strive for excellence. I hope that during my year as Best Barperson, I can act as an ambassador for the hospitality industry.” 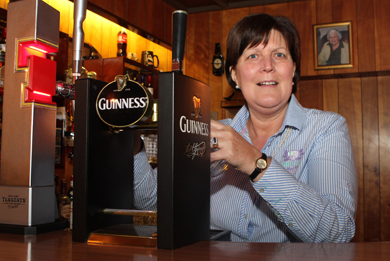 Bringing a coveted title to County Down is Margaret Ferguson at the Lakeside Inn near Downpatrick – joint winner of the Barperson of the Year.[/caption]

Margaret explained that the Lakeside Inn had a long history. “The bar goes back at least 300 years. It came into the family in 1925 when my grandfather Thomas Hutton bought it after 26 years working there. He passed on in 1959, and my mother Mita ran it from them on. We are all so much involved in the business. Even as a young girl I was working in it and grew up learning everything I know about bar work from my mother. She passed away in 2012 and my husband Geoffrey and I have been running it now for many years.

“It is long hours and hard work but very rewarding when you have such a lovely customer base such as we have. Over the years we have enjoyed  our loyal customers who come from far and wide. In some ways we are even very basic as we have no TV but we think that is important as people try and get away from all these things when they go out for a wee drink.

“We have helped raise £22,000 in just two years for charities and local groups by making our bar available for pub quizes mainly. It has become very popular. But we also organise other activities such as treasure hunts in the warmer months. We have a lot or organisations who use our lounge area regularly such as the Downpatrick Lions, Downpatrick and County Down Railway, the Ladies of the Lake, and Riding for the Disabled, and we also organise barbecues in the summer months. We even have birthday parties in the lounge which holds up to about 70 people.”

Looking back over the years, Margaret reflected: “I can remember as a child seeing hooks fixed to the ceiling where hams hung. ‘Hutton’s’ as it was called back then was a spirit grocer. It was on the old road to Dublin and was the main post office – the next one being in Newry.

“Next year we will be looking at a major event close by.  The Circuit of Ireland rally event will start close to the Lakeside Inn and it will be quite an occasion for Down District. Details have not been finalised yet though but it will be over Good Friday I understand.

“The bar itself has hardly been touched since the sixties. It is almost set in time. It adds a bit of charm to the place. It is a great pleasure to work there and I always look forward to opening up and meeting the customers.”

In addition to Margaret’s win on the night, the bar was also shortlisted for the Charity Initiative of the Year Award, in recognition of the excellent charity work they carry out.

After the Awards, Mark Stewart, chairman of Pubs of Ulster said: “This year’s Pub of the Year Awards has once again highlighted the fantastic commitment to quality within our local pub trade.

“There are top class pubs right across Northern Ireland and the Pub of the Year Awards recognise this and reward their excellence and the important economic, social and cultural contribution they make.

“I would like to thank all the pubs that entered this year’s awards and congratulate all the winners.

The Pub of the Year Gala Awards 2013 marked the end of an extensive search for the best pubs in a range of categories across Northern Ireland.

The pubs went through a rigorous judging process by the Pub of the Year Awards’ independent judging panel and were visited by mystery shoppers to ensure they adhere to best industry standards.  The winners in eight Award categories: Best Barperson (in partnership with the Sunday Life); Best Entertainment; Best Food; Best New or Improved; Best Marketing Initiative; Best Charity Initiative; Best Big Idea and the ultimate award – Pub of the Year 2013 were revealed at the Pub of the Year gala Awards which was hosted by Apprentice star, Jim Eastwood.

Killyleagh Mum Pens Book Of Poems For Her Late Son

Charities To Get £7.5million Support From DfC