<![CDATA[ <p style="text-align: justify;">Regional Development Minister Danny Kennedy has announced that a £2m project has got underway to improve wastewater treatment in Kilmore and Annacloy, County Down.

As part of the major investment, NI Water is converting the existing wastewater treatment works (WwTW) in Kilmore to a pumping station (PS); laying a new pumping main to take flows from the new Kilmore PS to Annacloy WwTW and carrying out extensive upgrade work at Annacloy WwTW. 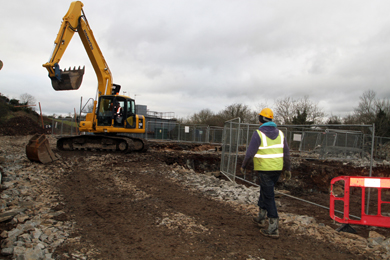 Work begins at the £2million waste water treatment works behind the industrial estate in Annacloy.[/caption]

South Down MP Margaret Ritchie has welcomed the improvements and said that it will benefit Kilmore, Annacloy and the surrounding areas.

“This project is of major significance to the area as it will add to local infrastructure. Improvement should be seen as NI Water is set to remove the old concrete structures at Kilmore. I also understand, the tanks being installed at the existing site, to the rear of Annacloy Business Park, are modern, fully covered treatment units that will provide a much more effective treatment solution.

“Residents in the villages of Kilmore and Annacloy will also benefit significantly in the long term from the 2million investment in terms of traffic management. Converting the existing Kilmore wastewater treatment works to a pumping station means that there will no longer be any sewage treatment at this site resulting in fewer tanker visits to this site once work is complete.

“Local business’ in the Annacloy and Kilmore area should also see a positive impact as a result. The project will result in the smooth and effective running of wastewater treatment”.

Margaret Ritchie said: “This  announcement by Danny Kennedy comes 44 years after original sewage works in Annacloy were established. This is good news as it will benefit residential and business communities as well as reflecting positive environmental strategies.”

Regional Development Minister Danny Kennedy said: “The Annacloy/Kilmore scheme represents a significant investment. It will serve to upgrade and modernise the existing wastewater infrastructure serving both villages, delivering significant benefits for the local communities and the environment.”

Kieran Grant, NI Water project manager said: “By converting the existing Kilmore WwTW to a pumping station means that there will no longer be any sewage treatment at this site resulting in fewer tanker visits to this site once work is complete. From an aesthetics perspective, the majority of the new pumping station equipment will also be constructed below ground level, allowing NI Water to remove the old concrete structures at Kilmore, a further advantage of the refurbishment for local residents and businesses.”

As a result of the investment, significant improvements will also be made at Annacloy. The tanks being installed at the existing site, to the rear of Annacloy Business Park, are modern, fully covered treatment units, which will provide a much higher quality treatment solution. The sophisticated processes being installed will increase the capabilities of the sewage works, deliver environmental improvements and ensure stringent EU discharge standards are met for many years to come. The design of the tanks allows them to be largely buried and to further screen the new infrastructure, landscaping will be undertaken around the site once the construction work is complete.

The work at Kilmore and Annacloy will be confined to the respective WwTW sites and should cause no impact to the local community. However, the pipeline to link the two assets will affect adjoining roads between the two villages and therefore will cause some disruption to traffic.

The pipeline route has been devised to avoid any roadworks through Annacloy village. Sections of the pipe will have to be laid along the Tullynacree and Teconnaught Roads. Unfortunately, the ground conditions in the area do not allow our contractor to utilise underground trenchless methods of construction and the pipeline will have to be laid using open cut methods. In order to complete this work safely, road closures will be required and we anticipate the details will be as follows:

NI Water and Geda Construction who won the tender will make every effort to minimise disruption and complete this pipelaying work as soon as possible and would like to thank residents and the general public in advance for their patience and co-operation while we complete the extensive programme of improvements. Signage will be erected in advance to notify the public about the road closures and the diversion routes, while letter drops will be carried out to any houses located directly on the pipeline route.

Customers with any queries about the work can contact the 24-hour Waterline number on 08457 440088 quoting: “Geda Construction – Kilmore/Annacloy Wastewater Improvement Scheme”.