<![CDATA[ <div style="text-align: justify;">YOUNG people involved in a new youth drop in facility came face to face with the law on Friday night. Members of the PSNI’s ASU rapid response team provided a talk and display on the dangers of knife and gun crime.

A total of 38 young people aged from 11 to 16 listened intently to the talk and display which included a simulated raid in which fully equipped officers dealt with a `suspect’ carrying a knife.
[caption id="attachment_47011" align="alignleft" width="390"] 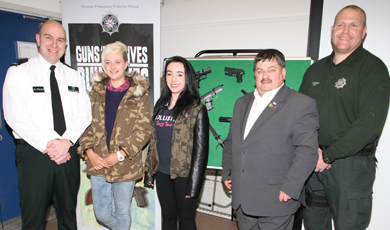 Councillor Billy Walker, second right, pictured at the Bridge Centre with members of the PSNI and local youths attending teh meeting.[/caption] There was also a well received talk from Down councillor Billy Walker  urging young people to keep out of trouble.
Councillor Walker said: “I want to congratulate the organisers for setting up this very useful programme for the young people of Killyleagh. The evening events have been very well attended and the youth have really enjoyed the sessions.
“It was good to see the involvement of the PSNI ASU team – their talk showing firearms and knives they have collected demonstrated that if you err on the wrong side of the law with weapons you will literally end up in prison. This is a subject that they certainly have to take seriously when growing up. I know almost all the young people in Killyleagh are very well behaved and they saw and listened first hand to the realities of being pulled into gangs and crime.
“I also gave a talk at the meeting and impressed on the young people that it can wreck your life if you get into trouble costing you the chance of getting a job and losing out on other life opportunities. I explained to them that I was there to listen to them and added that if there was anything I can do for them if they have any concerns, they should call on me as an elected representative and I will do my best to look at what they are concerned with.
“As a young person thirty years ago I know what it is to fall on the wrong side of the law and receive a custodial sentence. I realised then that I had made a big mistake and when I was released I became a community worker  and have since given my time to the people of Killyleagh.”
The youth drop in has been established at the Bridge Centre on Friday nights and runs from 9.15pm to 11.15pm. It has been supported by the Down Policing and Community Safety Partnership in association with the newly formed Killyleagh Youth Association as part of a roll out of a community safety initiative for Killyleagh. It is open to all boys and girls from the Killyleagh and Shrigley areas, and is free of charge.
The young people have already taken part in three weeks of activities including boxing and make-up sessions.
The youth enjoyed a visit by two DJ’s last Friday night who will train young people in recording a CD. European youth football coach Tim Wareing is also due to pay a visit later in February.
]]>