<![CDATA[ <p style="text-align: justify;">Killyleagh is preparing to mark the 100th anniversary of the start of the First World War.

The village is among the first in Northern Ireland to stage a series of community events to commemorate the outbreak of the war in August 1914. 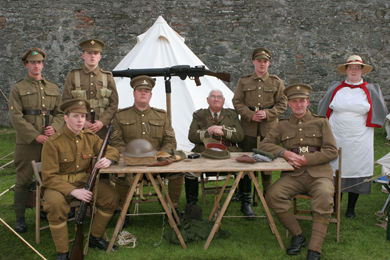 Members of the Irish Great War Society pictured during the Tatoo at Killyleagh Castle during the Great Poppy Party in 2011.[/caption]

A programme of free events has been organised with funding support from the Heritage Lottery Fund, running through from August to November. One of the organisers, Chris Hagan, explained: “There are a total of 16 cross-community events, which are free of charge, and the aim has been to engage people of all ages, looking at the events surrounding the declaration of war and how its outcome has shaped the 100 years that have followed.

“We are delighted with the support we have received from the community and are proud that Killyleagh is leading the way in commemorating one of the pivotal points in history.’

“A total of 244 men from the Killyleagh and Shrigley district volunteered to fight in the First World War, around a tenth of the local population at that time. They included all walks of life and all religions. Less than 200 returned.

“Two major public events are due to take place on Saturday 2 August and Monday 4 August. On the Saturday, a memories and medals day is to be held at the Lecture Hall in Irish Street, when it is hoped that relatives of men from the Shrigley and Killyleagh areas who served in the Great War will bring along their medals, and any memorabilia. 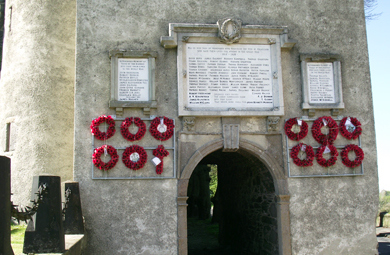 “The event also includes a lecture by Killyleagh-born Philip Orr, the author of the two leading histories on Irish soldiers’ participation at the Somme and Gallipoli. On the Monday night, the actual anniversary of the declaration of war, will be marked with a special open air commemoration at the Castle Square. It will open at 7pm with a pealing of the church bells of St John’s, 100 rings to mark the anniversary. World champion piper Richard Parkes will also perform in his home town.

Chris Hagan added: “A commemorative battlefield cross will be laid, with commemorative crosses also laid in memory of the 244 men who served. “A wide range of other events are also included in the commemoration with lectures and talks by Dr Eamon Phoenix, John Potter and broadcaster Paul Clark. A workshop for young people and art exhibition on the theme of war are also included.

“One of the unique features will be a war walking history trail of Killyleagh in which we will retrace the footsteps of the men of the Great War including taking in the graves of Sgt Moore McCleery and William Montgomery, and talking about how and where many of those commemorated in the town war memorial died.”

Copies of the full programme have been delivered to houses this week and are available at the library and the post office in Killyleagh. The project also involves publishing a history of the war, based on research work carried out by the Sloane’s History Group. Chris further explained: “There have been some really interesting family stories to emerge and we are keen to hear from anyone who can add to this.”

The organisers are keen to hear in particular from anyone with information about:

* Thomas Hickie, a member of St Mary’s Catholic Church who won the Military Medal and whose sister Mrs Rooney lived in Shrigley;

* information on David Boyd, the first person mentioned on the War Memorial;

*  the date of the unveiling of the Killyleagh War Memorial;

*  and information on the two Dynes brothers, killed in the war. 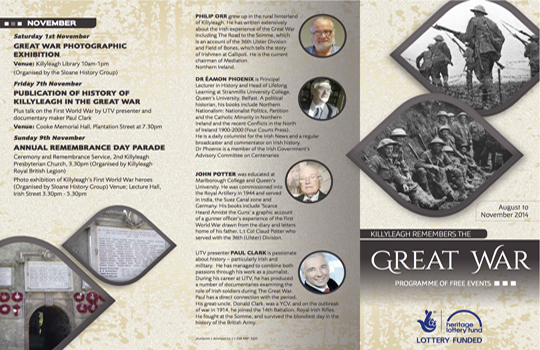 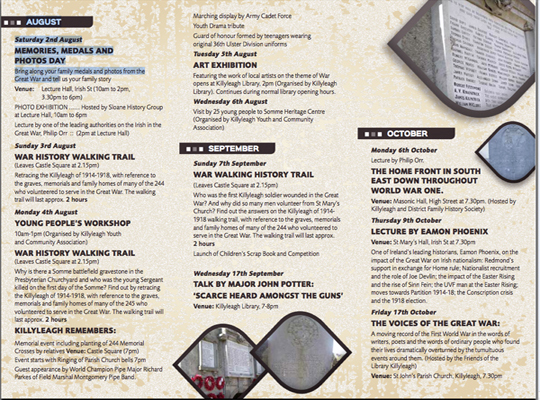