<![CDATA[ <p style="text-align: justify;">KILLOUGH residents are delighted at home improvements made recently by the NI HousingExecutive.

Down District Councillor Gareth Sharvin has praised the Northern Ireland Housing Executive on “the high volume of improvements they have recently carried out and continue to work on in the Killough area.” 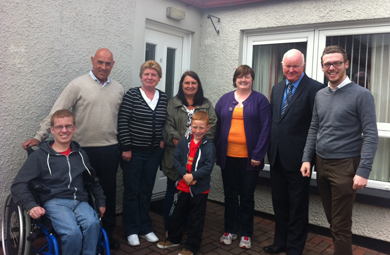 He explained that as a result of representation by himself and the meetings between Housing Executive officials and residents progress had been made to better homes in Killough.

Local Bay Court resident Monica Kelly said: “The new windows and doors are a great addition for making the home more warm, comfortable and safe and this winter will be less to worry about.”

Gemma Hill of Chapel View added: “I am thankful for the work NIHE have carried out on my home and the help Councillor Sharvin has provided. The house has much needed this work for a while now and it is a vast improvement on my home.”

And Pauline O’Connor of Kennedy Park also said: “The doors are fantastic. They are draft free and keep the home heated. I also received work on external drains to help clearing of water in the back garden. It would normally have flooded when heavy rain fell. This has made a real difference to our lives.”

Councillor Sharvin said: “The results speak for themselves and it is a great display of commitment to the tenants from the Northern Ireland Housing Executive. A large number of homes have and continue to receive work throughout the village.”

He added:  “Tenants raised the issue of windows across all homes. I have received confirmation that the remaining homes in Killough are being included to receive this work in the financial year of 2014-2015. This is due to the rotating and instalments of payments from DSD. There is also the factor of Northern Ireland Housing Executives housing to equally cover all areas throughout the Down District area. We must celebrate this future commitment and ensure it is being carried out.

Councillor Sharvin added: “I asked the Director of Housing in the Department for Social Development, Jim Wilkinson, what the total amount of funding is being invested in the Down District area. He informed me that in 2012/13, planned maintenance schemes were started in the Downpatrick area with a total value of £3,009,000.

“And for 2013/14, planned maintenance schemes are programmed with a total value of £2,749,000. This is subject to budget allocations being confirmed and possible changes to the figures throughout the year. This volume of investment reflects the commitment the Northern Ireland Housing Executive has to the tenants of Down District.”