<![CDATA[SINN Féin MLA Caitriona Ruane and Councillor Paul McGribben have said that despite what they described as a "tirade of abuse" from Unionists at the public consultation held by the Parade's Commission, meeting in Kilkeel (Thursday  28 February) in the Nautilus Centre, they will not be put off from putting Sinn Féin’s position forward to the Parades Commission. The Parades Commission had announced a series of engagement evenings throughout February and March. The events are open to the general public as well as public representatives. <a href="http://www.downnews.co.uk/wp-content/uploads/2012/08/dn_screen1.jpg">

Parades Commissioners are keen to hear from local people, and also to listen to their views on parading and the Parades Commission’s work. A number of Commissioners were available at the Kilkeel event for people to meet and discuss issues in a relaxed and informal setting. However, Ms. Ruane said: “I attended the Parades Commission consultation meeting in Kilkeel in order to put Sinn Féin’s position across but was met with considerable abuse from Unionists. “This verbal abuse was disgusting in nature and I am disappointed that the organisers did not have the culprits removed from the meeting as Nationalists attending the meeting felt intimidated.  There is no point in having these meeting if the organisers tolerate intimidation. “We have seen in recent weeks the Parades Commission coming under scrutiny in the way the flag protests have been handled and the inability to clearly state what was or wasn’t an illegal demonstration. [caption id="attachment_33055" align="alignleft" width="200"] 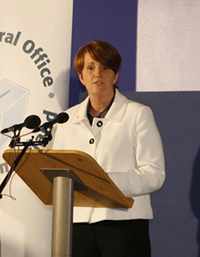 Sinn Féin South Down MLA Caitriona Ruane was angered at comments from Unionists at the Kilkeel Parades Commission meeting.[/caption] “We attended the meeting to listen to the Parades Commission and put forward our view that there needs to be a more robust approach to parades that do not have the support of the local residents of the area in which they are held. Councillor McGribben added: “It is important as we enter the marching season that we are clear that minority communities will be protected from sectarian or coat trailing marches in areas that they are unwelcome. “While the vast majority of marches are uncontentious the ones that are can be resolved through dialogue between the local residents and march organisers. “But if last nights contribution from the Unionists attending the meeting is anything to go by, then accommodation is not in their psyche as they still believe that domination is possible. “Sinn Féın have clearly stated that the days of domination are over and gone forever and the Unionist need to grasp the idea of a shared society. “I will be reinforcing the message that dialogue can resolve these problems and encouraging the Parades Commission to encourage that approach.” Parades commission Chairman Peter Osborne said:  “As a Commission we value the opportunity to engage with members of the public and those with an interest in parading. These meetings are a chance for us to meet with people outside of the context of individual disputed parades. “In representing civic society it is important we understand and reflect upon the broad views of the wider public, when reaching fair and balanced decisions on the small number of contentious parades. We are looking forward to the series and hope that members of the public will take this opportunity to engage with us.”  ]]>