<![CDATA[ <p style="text-align: justify;">“You don’t bring a child up in a homosexual relationship. That child is far more likely to be abused and neglected…”

Those were the words uttered by NI Health Minister Jim Wells MLA at the hustings debate of all the seven South Down Westminster election candidates held in the St Patrick Centre in Downpatrick on Thursday 23 April.

Down News was at the debate seated in the middle of the audience and could feel immediately the intense reaction all round at Jim Wells, the South Down DUP Westminster election candidate.

Police are now currently investigating Well’s comments following a complaint. And he is to appear before the Stormont Health Committee next week to explain his conduct despite having released a public apology, and the SDLP have tabled a vote of no confidence in him in the NI Assembly.

In his apology on Friday morning, Mr Wells stated: “I accept that one line of what I said caused offence and deep concern. I regret having wrongly made that remark about abuse and I’m sorry those words were uttered. The comment did not reflect my view nor that of my party.“ 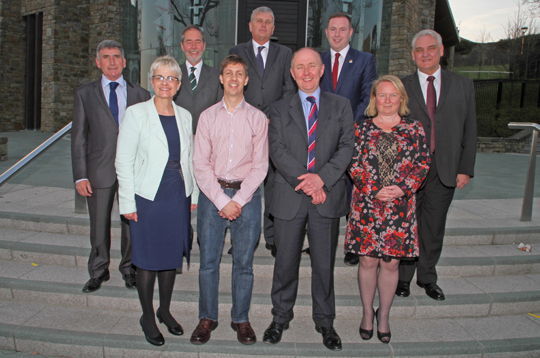 It was the second question of the evening at the hustings debate, asked by Downpatrick man Peter Surginor. This debate was the first ever of its kind in South Down, and immediately the packed audience errupted shouting “Rubbish!” and “Shame” and Mr Wells only then made an effort to retract his comment, but by then the political touch paper had been been lit. A public outcry has then rapidly ensued.

Peter Surginor’s question asked: “With equal marriage in place in the rest of the UK, is it time for Northern Ireland to follow suit?“ 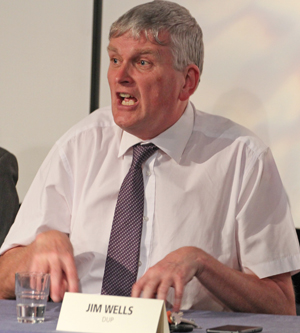 South Down MLA Jim Wells and NI Health MInister responds to the question on gay marriage being passed in law in Northern Ireland.[/caption]

Speaking to Down News after the debate, Peter, who lives in the Downpatrick area with his partner,  said: “Everyone in the room was completely opposed to Jim Wells’ remarks to my question. I just don’t how he can get off with this – if he were a politician in the rest of the UK making such a comment he would be very heavily censured and probably stood down by his party.

“Well’s comments were simply inflamatory. They were hurtful to the audience and more so to members of the LGBT community. I believe that he could be seen as treating the LGBT community as second class citizens. It is just not responsible behaviour, especially for a Health Minister. I would have expected better. He should be a role model.

“Jim Wells said: ‘Marriage is between one man and one woman and if you want gay marriage don’t vote for me… marriage is for procreation and the bringing up of children.’

“How could a LBGT person in his constituency in South Down go to him for advice? How could he represent South Down? They would not feel comfortable. An apology is not enough. He should simply fall on his sword and resign.

“I know when other people are under pressure due to illness, bereavement and otherwise that they cannot make such wild comments in their workplaces or in the community especially at a public meeting, especially with the press present. I accept he has had a difficult time regarding his wife’s illness, but neither he nor his party should hide behind this. He is a professional politician and must accept this responsibility.

“Basically his behaviour was not acceptable and it simply lowers the bar in creating a society of equal rights to the fore. The LGBT community  feel unfairly challenged by his comments,”  added Peter Surginor.

Jim Wells’ comments have caused a furore reaching to the core of the political establishment in the UK and discussion around the shape of the party structure at Westminster post-election. Nick Clegg, speaking on BBC, said: “I’ve been warning for weeks that while, of course, we should be alarmed about the prospects of Ed Miliband dancing to the tune of Alex Salmond, we should be equally alarmed at the prospect of a hapless David Cameron, minority Conservative administration, dancing to the tune of Nigel Farage, the right wing of his own party and some of these truly, truly, backward looking views from the DUP.

“This prospect of a Blue-KIP alliance of the right wing of British politics is now a real threat to the future economic stability to our country and just not representative of mainstream views around the UK… I don’t want to see a right wing blue alliance run our country… [with] regressive backward looking views”.

Speaking the day before the controversial outburst, UK PM David Cameron said he “will never validate” the Democratic Unionist Party’s stance on lesbian, gay, bisexual, or transgender  issues. Cameron’s opinion must now be sealed following Jim Well’s outburst on Thursday evening and the DUP may be written off as potential partners in government.

Even within the DUP, all is not well. Pam Cameron, a South Antrim DUP MLA, has distanced herself from Jim Well’s comments and tweeted: “If what I am hearing from #sdhustings is being reported correctly, I as a DUP MLA disagree and disassociate myself from such comments.” The question remains, how many other DUP MLA’s are equally disaffected?

It appears now that the DUP has shot itself in the foot in the run up to the election. This row may even cost the DUP the Westminster seat in East Belfast, held currently by the Alliance’s Naomi Long and contested strongly by her party. Prevaricating DUP voters may switch to the UUP changing the fine balance and allowing Long to return to Westminster. Or they may even vote for Alliance.

Literally this storm has influenced the shape of British politics where the DUP were once a potential front runner as a minor party in a UK coalition government. The SNP will now feel even more empowered as brokers in a post-election coalition.

DUP Party Leader Peter Robinson has sided with Jim Wells in lending him support as a person under personal pressure because of his circumstances and is accepting his momentary gaff as a moment of weakness. Peter Robinson said: “…on a better day Jim would not have made such a comment.”

But Sinn Féin’s Martin McGuinness, Deputy First Minister, has called for Well’s resignation.  And the SDLP are condemning Jim Wells and have lodged a motion of no confidence at the Assembly  against Jim Wells, Health Minister.

But as the weekend unfolds, the DUP are closing ranks and backing Jim Wells. The Newsletter front page headline  on Saturday morning “DUP backs Wells in gay comments row” shows that despite apparent efforts for the DUP to change its position on LGBT issues, the party is still very much on the right wing.

The UUP leader Mike Nesbitt  has also personally vowed to vote against gay marriage at Stormont with the DUP but on the basis that it is a “sacramental” matter.

The Irish News has also covered extensively the row over Jim Well’s comments on Thursday evening, with an interview with Stuart  Andrew, Conservative gay MP (for Pudsey, Horsforth and Aireborough) who rounded on Jim Wells saying his comments were “ridiculous” and slammed Wells for not being British as this indicated a quality of required  tolerance. The extensive coverage of the Irish News also presented a fairly comprehensive litany of  incidents involving the DUP called  ‘A history of offence and insults against homosexual community’.

Next week Jim Wells will face the music as the Assembly Health Committee and the vote of no confidence may proceed at Stormont, but in the final analysis, it may all rest in what Jim Wells said at the debate. This may make his bid for the Westminster seat completely untenable, and even his efforts to get re-elected as an MLA in the Stormont Assembly election in 2016 could be on thin ice.

Glenys Johnston, acting as an interim chair of the Safeguarding Board for Northern Ireland, speaking on radio also expressed her concerns and said: “There was no evidence to suggest that a child brought up by same sex couples are any more at risk of abuse than those brought up by heterosexual couples.”

On Thursday 30 May the second hustings debate takes place in the Newcastle Centre at 7.30pm. It remains to be seen if Jim Wells will continue to take part in this debate given the public controversy.