It was certainly not as dramatic as the invasion in Day of the Triffids, and no-one was eaten alive, but these pesky plants nevertheless collectively can seriously damage the environment and cause concerns to public health. 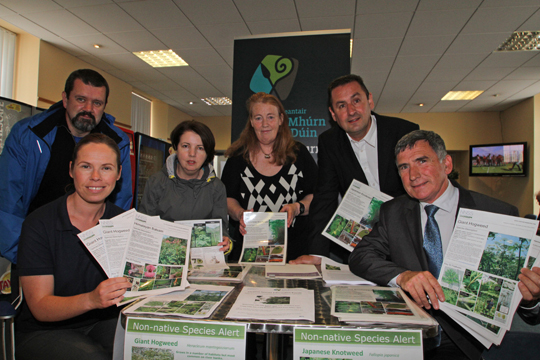 “Japanese Knotweed can grow anywhere and travels along waterways, because of its rampant growth it destroys all plant life in its path, and ultimately it is destroying habitats and has the potential to weaken the river banks. Delays in beginning to map and tackle Japanese Knotweed are likely to lead to greater costs, as the knotweed will continue to spread.

“Raising awareness within the public and developers about the problems caused by Japanese Knotweed and the costs associated with tackling and disposing of the knotweed can help stop the its spread.”

Kilkeel area Councillor Harold McKee also supported the public awareness session and said: “It is important that the public get to know the potential for damage these plants have and how they can adversely affect our health.

“The Himalyan Balsam proved to be a serious problem in the river in Kilkeel and it took a huge effort to get it under control.  And Giant Hogweed can be very dangerous too if its resin ends up on your skin which may blister up, you may have to go to hospital for treatment.

“Japanese Knotwood can seriously damage properties and dramatically affect their value. It may be difficult to get a mortgage for example of it is growing in an adjacent property. So the sooner these plant pests are controlled the better.”

Danielle Beggley, Biodiversity Officer for Newry Mourne and Down District Council, said that it was encouraging that people visiting the Newcastle Centre were stopping and asking questions about these invasive species. She added: “Public awareness is very important and we have been giving out leaflets with information and photos of these species so people will be able to identify them and report them to the Council so we can assess what is going on and treat these plants before they spread further.”