<![CDATA[ <p style="text-align: justify;">A joint statement by the six elected Down District Councillors for the Newcastle District Electoral Area in relation to the sale of the former St Mary’s School site in Newcastle has been issued following a breakdown in he negotiating process of the sale of the site  (Saturday 15 February 2014).

There has been widespread concern through the Newcastle Community following this eleventh hour development. The funding and development  process for a proposed new leisure centre may now be delayed and become part of the new South Down council merger process between Down District Council and Newry and Mourne District Council. Unless a deal is struck, it could be stalled indefinitely until the RPA local government reform process unfolds over the next couple of years and the new South Down super council provides the support for the new centre.

South Down MLA Seán Rogers (SDLP) has spoken out as news broke that the St Mary’s Girls School site is no longer being sold to Down District Council for Newcastle’s new Leisure Centre. 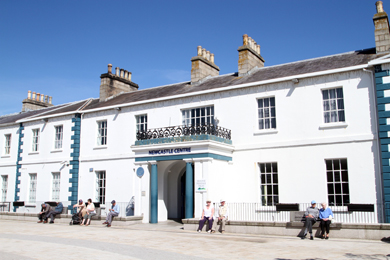 The current Newcastle Leisure Centre is facing difficulties with ongoing repairs and maintenance and Down District councillors have now hit a brick wall in trying to build a new leisure centre in the town as a land deal collapses.[/caption]

Mr Rogers said: “I am deeply disappointed at how this matter has unfolded.  Following protracted negotiations, I understand that  the Parish of Maghera agreed to sell this site to the Council. And it is my understanding that Council has invested heavily in moving the project forward, so for the Church to make a u-turn at this late stage is very worrying. What is of even of more concern is that the reason given is that the agreed price is now too low.

“In light of this new information, I have written to the Bishop seeking his urgent intervention as the hostility within the local community towards the Church at the moment is palpable.  Over the centuries the Parishioners have contributed to the development of the Schools and Churches in the Parish of Maghera. It is the property of the Church but without parishioners there is no Church. This is no ordinary sale, what the Church was doing was selling it back to the council in order that the community could benefit.

“I am curious to know, who is the new bidder and what is their intentions for this site?  Surely a Leisure Centre with an indoor pool and facilities for local children and tourists alike, as well as for the many sporting enthusiasts that the greater Newcastle area has would be much more beneficial to the wider community including the Parishioners of Maghera, so I hope that the Church can see sense in allowing this sale to proceed.”