<![CDATA[ <p style="text-align: justify;">The first historic meeting of the newly formed Newry, Mourne and Down Council was convened on Tuesday 10 June at the Downshire Civic Centre in Downpatrick with all of the 41 recently elected members in attendance. 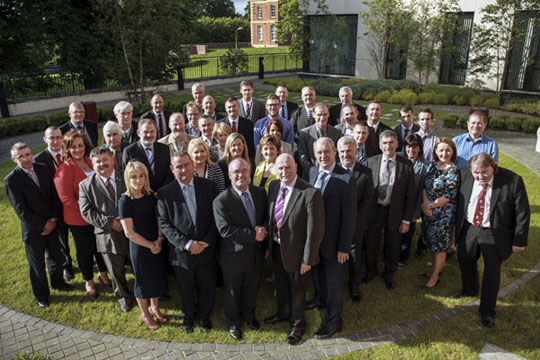 The 41 councillors on the Newry, Mourne and Down Council pictured at their first meeting at the Downshire Civic Centre in Downpatrick.[/caption]

The new Council’s working title is Newry, Mourne and Down District Council, however, the newly formed Shadow Council will have the powers to change the name of the new Council. 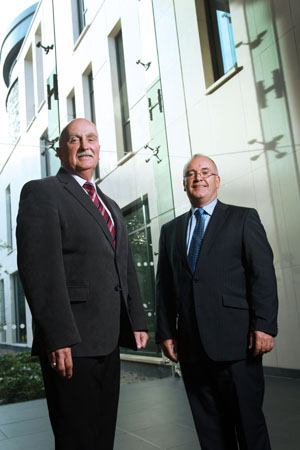 Councillor Casey commented: “I am delighted to be nominated as the first Presiding Chair of Newry, Mourne and Down Council and I wish to thank my Party (Sinn Fein) for entrusting me with this important role.  The work of the Shadow Council in the first year is vitally important as it will shape the direction which Newry, Mourne and Down Council will take.  Sinn Fein has extremely high hopes for the new Council and I want to start by congratulating each of my 40 fellow councillors on their election success.

“The citizens of Newry, Mourne and Down have placed their trust in us and it is important that we deliver top class services for them.

“I also want to wish our Chief Executive Liam Hannaway and all of the Council officers well in their new roles and I am confident that we will create a good working relationship and work as equal partners for the development of this new district.

“There is much work to be done over the Council term and I am enthused and energised for the challenges ahead.  So let’s go forward in a spirit of comradeship to provide the people of this district from Culloville to Saintfield and everywhere in between with the service they deserve,” added Cllr Casey.

Public Services delivered by Councils will remain largely unaffected by the restructuring.  However, the new Council will have transferred powers and functions from central government.  Functions transferring include:  Planning, Community Planning, Regeneration and some aspects of Housing.

Councillor McAteer explained: “The new Council will have an important role in relation to all Planning applications for development of the new area, we will have the power to approve Planning applications.  In my position of Vice Chairman, I believe that we have to prove to the people that the devolution of power to our local Council is seen by the public on the ground and that they will have a positive experience and confidence in what we do.  As I take up this position, I give an undertaking that I and my Party (SDLP) colleagues will do our utmost to realise these expectations.

“A new Community Plan will also be developed in partnership with other public service providers in our area, this will enable us to address the needs and aspirations of communities.  I look forward to Newry, Mourne and Down District Council leading and facilitating on this programme.  Integrating both these functions will bring a new synergy and a more complete view of how the district should be developed for the greater good of our communities and our environment. 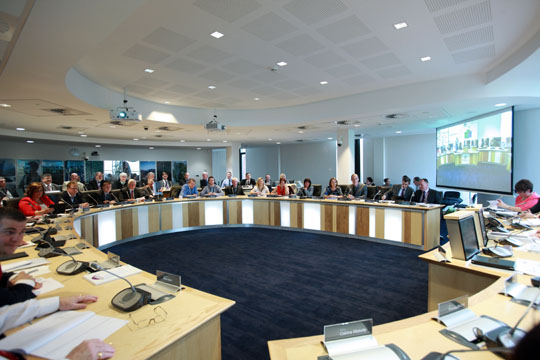 The Mourne Room at the Downshire Civic Centre was the setting for the first meeting of the new Newry, Mourne and Down Council.[/caption]

Mr Liam Hannaway, who took up the post of Chief Executive Designate for Newry, Mourne and Down District Council in April 2014 remarked: “I am delighted with the clear political direction provided by the Members at their first meeting.  It is a good model for moving forward to developing a new vision and clear objectives for the new district.  All of the new District Electoral Areas were represented, it was a really good turnout.  I look forward to seeing the benefits of streamlining our resources and delivering modern day services in a more appropriate and business-like manner.”

The new Council Chief Executive will initially be supported by a small team of officials who will work towards transferring staff to the new Council, decide on its own budget and set the new district rate.

Shadow Council meetings will take place every month and are open to the public to attend.  The next Council meeting will be on Tuesday 8 July 2014 at 6pm in Downshire Civic Centre.

The new Council of Newry, Mourne and Down will be the third largest Council in Northern Ireland

The main Belfast to Dublin transport corridor runs through the new Council area with all the important economic benefits that come with it.  We have three areas of outstanding natural beauty – Strangford and Lecale, Slieve Gullion and the Mournes

The new Council area will have two major hospitals; elected members will continue to fight for services to remain in the Downe, Downpatrick and in Daisy Hill, Newry.