<![CDATA[ <p style="text-align: justify;">HEALTH Minister Edwin Poots today updated the NI Assembly on the measures he has taken to reassure the public that they can have confidence in the service provided by hospital emergency departments (ED). Down News has below included the full statement from the Minister to the MLA’s.

Last month, Mr Poots directed the Regulation and Quality Improvement Authority (RQIA) to carry out an inspection of the Emergency Department and the Acute Medical Unit at the Royal Victoria Hospital (RVH). He has also asked the RQIA to facilitate a separate, external review of emergency services in the RVH and across Northern Ireland. 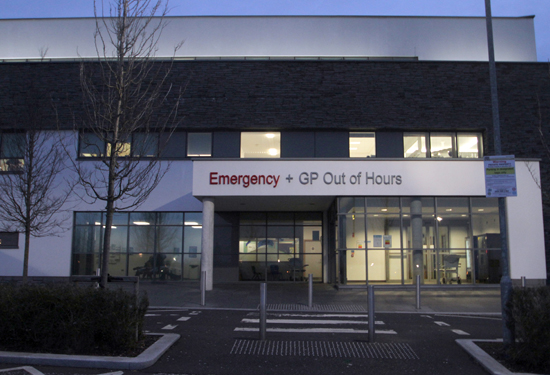 The Downe A&E department… now closed at weekends and after 8pm weekdays… but will Minister Poots’ words bring solace to the health campaigners?[/caption]

In a statement to the Assembly today, the Minister said: “In recent weeks there has been continuing debate, not least in this Assembly, about the pressures faced by emergency departments. Questions have been asked about whether these pressures are routine. Are they caused by a shortage of staff or funding? Are ambulance turnaround times too slow? Are winter pressures more acute than normal this year? Are these pressures and the underlying causes peculiar to Northern Ireland or are we witnessing a national phenomenon explained in part by the growing elderly population or by an inability to attract junior doctors to work in emergency medicine? All of these are questions that we need to address if we are to sustain and improve the high standards of emergency care in the province.”

The Minister reiterated to Assembly Members his comments in the chamber on 28 January: “I referred to the wide range of measures that we have put in place to manage the vastly increased workload on Health and Social Care to meet and service the needs of our population, which is growing older. I also stated that we are mindful that the performance of our emergency departments falls behind that in other parts of the United Kingdom. I am keen to learn from the widest range of peers and to benchmark against the best.

“In this context I referred to our involvement with GB expertise in the Northern Trust, for example, and that I was giving consideration to how we could utilise similar expertise to test whether there are more things that we could do better in our emergency departments, particularly in how they integrate with the rest of the hospital.”

The Minister said he had written to the HSSPS Committee on two separate occasions outlining his plans on how best to seek assurances that EDs are providing care of the highest quality and safety and identify areas where there may be opportunities to make improvements.

He went to say: “Taking account of the advice I have received from clinicians and professional staff working in our EDs, I have commissioned the Regulatory Quality Improvement Authority (RQIA) to do two things to help ensure that the Belfast Trust and the wider Health and Social Care system can act as effectively as possible on the issues arising from recent events and to ensure that there is a full and open process of review.”

The Minister also told MLA’s that, on his instruction, starting on 31 January, the RQIA had carried out inspections at the RVH assessing the quality of care and dignity afforded to patients in the ED and Acute Medical Unit. He then said that he had also asked the RQIA to facilitate a wider review under its role and powers. The review will be led by Dr David Stewart, the RQIA Director of Reviews and Medical Director and report in June. The other members of the review team, while not yet confirmed, will bring expertise from all the essential disciplines required in the speciality of emergency care.

Mr Poots told Assembly members that he has not yet received the full and considered findings from RQIA but added that it had shared preliminary findings with the Trust, PHA, HSCB and the Department.

He said: “I have been advised that the inspection identified a range of issues which cause me and my Department to have serious concern about whether the Belfast Trust is consistently performing to the high standards that I require in executing its responsibilities both to patients and staff. I do recognise however that some of these are wider issues that cannot necessarily be addressed by the Trust on its own.

“The emerging findings help to put all the concerns that had been circulating into a clearer context. Nevertheless, this is a disappointing outcome and reflects the unacceptable experiences that many of us have had related to us by some patients and staff. I am resolved that this will be fully and comprehensively addressed as a matter of priority.

“The Inspectors spoke to more than 100 staff across a range of roles and functions. The Inspection has confirmed concerns about staffing levels in key areas, allegations of bullying, staff under intolerable pressure, and a system of care that does not function fully as it was set up to do. The concerns relate to the Emergency Department itself, to the Acute Medical Unit (AMU) and to some aspects of the wider hospital and Trust functions. There are genuine and heartfelt concerns from clinicians about the impact this difficult situation is having on patients.

“Against that background I am glad to say that the Inspection confirmed that there is an overwhelming desire from the staff to be part of the solution and I want to assure members that this will happen.”

He told the Assembly that he had also been in contact with staff in the RVH while others had made their views known through engagement with the RVH and the PHA.

“While I recognise the gravity of the situation I wish to reassure the public and the Assembly that the Belfast Trust will continue to provide services in the RVH’s Emergency Department to meet the needs of its population as a result of the commitment of all staff, and is acting to manage the risks that have been highlighted,” said Minister Poots. “We need, however, to ensure that this is embedded in how the care is organised and delivered. The Trust’s management team has responded with an open and fully transparent approach to the RQIA’s inspection and is working constructively with the Board, PHA and my Department, in moving forward.

“I think it is right to express high appreciation for all staff who provide emergency care in the Belfast Trust for their dedication and commitment to their patients – most obviously to all the front line staff who have kept going with a blitz-like spirit but also to the senior managers who are wrestling with highly complex and challenging responsibilities. I would urge members to recognise the great complexity of the situation, if easy solutions were available they would have been adopted.

“I want to thank the staff for their candour in expressing their views to the RQIA. I understand that the staff have welcomed the inspection and I hope that they can now have confidence that their concerns will be fully addressed.”

The Minister finally said: “I have made clear from my first day as Minister that the underlying objective for the entire health system is to protect and improve the quality of services we deliver. The health service must be safe, effective and totally focussed on the patient. They are at the heart of everything we do. Today I can assure the Assembly of my commitment to continue to work to improve the care provided for all patients, not least those who use our ED’s.”