<![CDATA[STRANGFORD MLA Simon Hamilton was a speaker at the first ever TEDxStomront event held recently at Parliament Buildings. TED is a not-for-profit organisation dedicated to presenting filmed talks on the web on a vast range of subjects but with the common theme that they are ‘ideas worth spreading’. It’s a brilliant website. TEDx refers to independently organised events dedicated to bringing those ideas home to a local audience. The theme for the Stormont event was ‘<em>Imagine’ and attendees heard talks from the First Minister and Deputy First Minister, as well as Snow Patrol’s Gary Lightbody and Jim Eastwood of the Apprentice-fame. Simon Hamilton chose to speak on the subject of ‘Mind the Gap’. [caption id="attachment_37857" align="alignleft" width="390"] 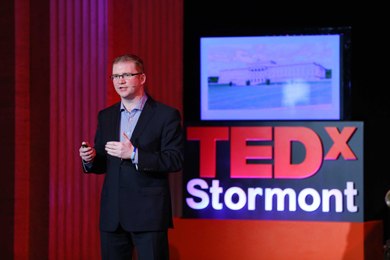 Simon Hamilton at the TEDxStormont event at Parliament Buildings.
(Photo by Kelvin Boyes / Press Eye.)[/caption] Speaking at TEDxStormont, Simon Hamilton said: “My central theme is gaps and bridging them.  They are part and parcel of the political, social and economic lexicon: Gender gaps, Productivity gaps, and the gap between rich and poor. “I want to talk about a gap that concerns me greatly. A gap that poses a challenge and a potential threat to governments the world over, including our own. “Governments everywhere must deal with scarcity.  Governments are limited by the resources they have at their disposal.  No government can ever deliver everything that its citizens want or need but that reality doesn’t seem to constrict the aspirations of much of the population. “That then generates a gap that I call ‘the expectations gap’.  In essence, public expectations of what their government can achieve grows at the very same time as what their government can actually deliver decreases. “There are probably lots of different ways in which we could attempt to close this expectations gap but what I want to talk to you today centres around one – Innovation. “People, especially politicians, encourage our companies to become increasingly innovative.  The future of our economy in every sector is recognised as being knowledge based.  When we think of innovation, many of us have an image in our minds of someone in a laboratory, dressed in a white coat, working with a test tube and a Bunsen burner.  You don’t tend to think of Stormont. “Cynicism will undoubtedly infect our belief in our own ability in government in Northern Ireland to innovate. “But I believe that we are perfectly placed to become the most innovative public sector in the world.  I imagine a Northern Ireland that is a “laboratory of ideas. Ideas that benefits the citizens of Northern Ireland. “Ideas that are also an example to the world. “It isn’t as if innovation is alien to us in Northern Ireland in either the private or public sectors. “The three mosaics in the ceiling of the Senate Chamber depicting farming, shipbuilding and linen remind us of a time when we built ships that sailed the world and planes that won a war.  When this tiny nation was a player in the global market before the term was even invented. “Can we innovate?  Yes, we can.  How de we know? Because we have done it before.  Why aren’t we applying that innovation that is in our DNA to the public sector as well? “The truth is, we are.  Perhaps the best example I can think of in Northern Ireland at present is the use of connected health. Pressures on the health budget have created an opportunity to invest in measures like remote telemonitoring and a teleprescence robot. “Perhaps we in government will never be able to totally bridge the expectations gap.  Like my kids at Christmas and what they want from Santa, I suspect that people will always believe that their government can and should be doing more than it is actually able to. “But by making it even easier for citizens to engage with government. By using platforms like apps that people of all ages are increasingly familiar with and fond of using. “By recognising that as advances in technology increase public expectations, so too can its embracing by government close the gap. “Then we go some way to removing actual and perceived barriers that government is distant and remote and unresponsive. “There’s load of other ways in which government can innovate. Using procurement to produce new ideas. Focusing much more on prevention. Devising different models of service delivery. Working much more with the private and third sectors. Encouraging collaboration across government.  And using new technology to improve engagement. “If we aspire to become the most innovative public sector in the world, maybe we can begin to imagine a future where instead of minding gaps, we’re bridging them”.]]>