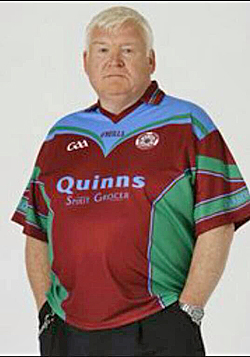 “It is with great sadness that we share the news of the sudden and untimely death of our great friend and club member Derek Davis.

” Big Derek as he was affectionately known was a true gentleman big in heart, big in generosity and big in friendship to all those who were fortunate to come in contact with him. His association with Glasdrumman and the GAA started when he was selected to be the Glasdrumman Celebrity Bainisteoir. He was fascinated by the fact that not alone was the club at the centre of the community, the club was the community writes Tony Bannon.

“Derek was proud to tell people that Glasdrumman was his club and was always keen to come up and help the club with anything they wanted to run.

“His brother-in-law Des Cahill summed it up when he tweeted earlier this week “I couldn’t get Derek Davis excited about ‪#‎GAA‬. Until Celebrity Bainisteoir & wow, did he love the Glasdrumman lads!”

“We had the privilege of spending time with him two Mondays ago when he came up to support the team, as he did regularly, against Aughlisnafin leaving us with a promise to return soon.

“On behalf of the members of Glasdrumman GAC and his many friends we tender our deepest sympathy to his wife Una, his three sons and the entire Davis family circle on their sad loss. Go ndeanai Dia trocaire do a anam uasal dhilis”.