Home Belfast Giants Giants Strike Lightning Twice At Weekend
Share
Facebook
Twitter
Google+
Pinterest
WhatsApp
Giants Post Seven To Strike Milton Keynes Lightning Twice.
They say that lightning never strikes twice in the same place but The Stena Line Belfast Giants made it two wins in as many nights over the Milton Keynes Lightning, taking a 7-0 decision on Saturday night at The SSE Arena.
A hat-trick for Darcy Murphy plus two each for Pat Dwyer & Kyle Baun as well as a shutout from netminders Tyler Beskorowany and Stephen Murphy were key to the Giants Saturday win. 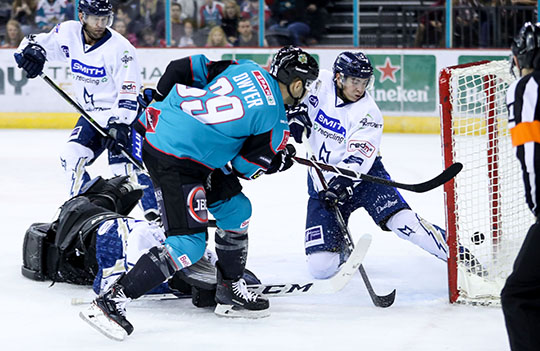 Tyler Beskorowany started in the Giants net and turned away 13 shots with Stephen Murphy taking over for the final period. Missing for the Giants were Mark Garside, Jim Vandermeer, Matt Towe and Andrew Dickson.
The Giants impressed during the opening period and took a well earned lead at 5:03 when Darcy Murphy’s fierce wrister nestled in the top shelf of the MK net.
Pat Dwyer doubled the hosts lead at 13:14 with a fine unassisted goal, dancing around a Lightning defenceman and cooly slotted past Killeen.
In the second period Kyle Baun stabbed home from close range, assisted by Pat Dwyer, at 26:58 to extend the Giants lead on the powerplay.
Pat Dwyer grabbed his second of the game with another unassisted strike at 35:24.
Then in the final period Kyle Baun made it five on the night for the Giants with his second of the game, tipping home Hunter Bishop’s pass at 49:07.
Darcy Murphy doubled his tally on the night on the powerplay when David Rutherford picked him out at the back post at 50:19.
Darcy Murphy’s hat-trick was complete at 57:29 when David Rutherford fed him the puck at the back door to slot home and round off Saturday’s scoring.
Final Score:
Stena Line Belfast Giants 7-0 Milton Keynes Lightning
Giants Man of the Match:
#15 Darcy Murphy (hat-trick).

Domestic Rates Bills Are On Their Way Now