<![CDATA[Doting father of five, Ballynahinch man David Foster, is ready for his up-coming title fight this coming Sunday in London. He will face Scott Bryans for the unprecedented fifth time, only this time it is a for a British WKN (World Kickboxing Network) Welterweight full contact crown. The previous 4 bouts between these two saw two wins which includes the British title for the Londoner Bryans two draws and a win for Foster. This time Foster is determine and sure he will be victorious and bring the British welterweight champion belt back to Ballnahich. [caption id="attachment_36593" align="alignleft" width="360"]<a href="http://www.downnews.co.uk/wp-content/uploads/2013/02/Davy-Foster-Vs-Scott-Bryant-PRESS.jpg"> 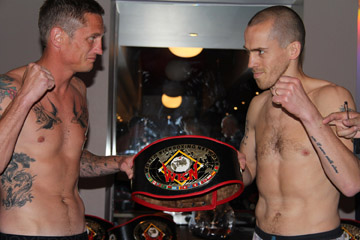 Davy Foster, right, facing Scott Bryans fro the British welterweight kickboxing crown.[/caption] David has become a Prokick instructor in his hometown and has recorded an 18 fight career. Two years ago he fought as far away as Japan, on the Hoost Cup in Nagoya, Japan where he picked up a win. The Ballynahinch man is so dedicated to his chosen sport and drives four times weekly to the ProKick gym in Belfast.  He was teaching every Friday night at the Saint Patrick’s Church Hall in the centre of Ballynahinch. But has since put that on hold to concentrate on this Belt. This will be the last stab at his nemesis Bryans,  and win or lose this will be the last time the two battlers will ever face each other. Scott Bryant the current WKN British champion who will retire after this fight. The event will be promoted by London’s team Cox, a father and son partnership, who have invited some of the ProKick team back to London – the squad will make a welcomed return to England’s premier kickboxing promoters event. ‘Team Cox’ . The fight card to date is as follows: “Rematch – for the fifth time! David Foster (NI) 66kg  Vs Scott Bryant 66kg  5×2 min rounds full-contact.” Meanwhile, the ProKick team have been busy; Belfast Mum, Ursula Agnew is Northern Ireland’s  latest world kickboxing champion. She now adds the WKN (World kickboxing Network) world belt to her Celtic Nations, British and European crowns. The ProKick fighter faced champion Kimberley “THE BULLET” Dewulf for the WKN amateur world K1-style 58.5kg division title. Ursula lifted the WKN world amateur title on a points decision at the end of the 5 round contest in Belgium on at the start of FEB 2013. On Friday 15 February, The Iceman, Darren McMullan from Ballygowa, is still UN-beaten in his third Swiss show and all within 18 months. This was the third time McMullan has been offered fights in Switzerland. But  was not the results the Ballygowan star wanted. The fight turned out to be very bloody between France’s David Firaguay and Ballygowan Ice-Man Darren McMcMullan, only because of an accidental head clash that left a nasty gash on the forehead of the French fighter. The fight was declared a no-contest as one full round was not completed to allow the judges to score. Darren said: “I’m so disappointed the fight was called to a stop by the referee at 1:12 of the first round. I was wondering why the doctor wasn’t called into the ring, but when I saw the cut it was a good call by the ref to stop the match. I really felt strong and was looking for a good display before my next fight in Germany for the European title against German David Wachs. I’m very disappointed for me and David, no one wants a fight to end like that it could have been an excellent test of skills for the both of us. “One good thing, I’ve no injuries from this short bout, so I’ll be back in the gym right away this week with no disruption and getting ready for my revenge match in Germany on 30 March.”

For more info on kickboxing and to find out more on these home grown champions – log onto www.ProKick.com
]]>