The hard-pressed fishermen who have hardly made a shilling since last October queued up at the Fishermen’s Mission building on the harbour to receive emergency hand-outs after it came to the Mission’s attention that fishermen and their families were in dire straights.

The Fishermen’s Mission superintendent Maurice Lake had succeeded in finding a fund and immediately made it available to the fishermen on realising that they and their families were experiencing severe hardship. Down News understands that a sum of around £50,000 has been made available to assist across the three fishing ports of Portavogie, Ardglass and Kilkeel.

Some received cheques totalling several hundred pounds to cover their domestic oil bills and pay of fuel arrears, or food vouchers for ASDA. Some had their accounts in local shops cleared and further cheques written for food. Others had rent and essential mortgage payments covered. It was a shot in the arm like the fishing port has never received in the past and many families are more comfortably off now because of the great generosity of the Fishermen’s Mission. 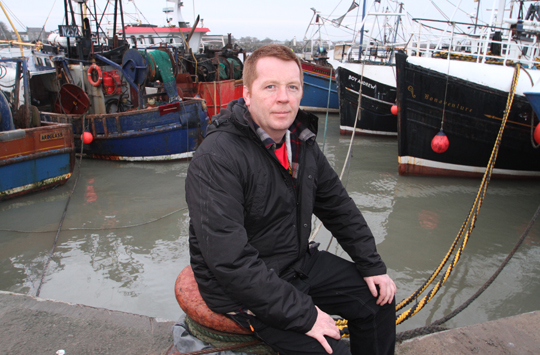 Ardglass skipper Martin Rice has welcomed the hardship payments given out to local fishermen by the Fishermen’s Mission.[/caption]

Martin Rice, a skipper on the prawn trawler, the Alison Mary, and the vice-chairman of the recently founded Fishermen’s Forum, said: “These hardship payments are good news for Ardglass and the fishing families. In speaking to the Fishermen’s Mission, I learned that they may possibly be able to tap into some more funding but we will have to wait and see. What they have delivered so far to help out the fishing port of Ardglass has been impressive and tremendous. The Mission has been extremely helpful at this very difficult time and I know that many fishermen were at their nerves end.

“Our fishing industry has struggled very poorly since last October and this is the second year in succession they have faced a severe winter of bad weather and high winds. Last year the local fleet only managed just over four months good fishing for prawns as the season was uncharacteristically short. The boats and the fishermen managed to pay of their  bills from the previous year but were again looking into the uncertain void.

“They are all really grateful for the help from the Fishermen’s Mission. It is incredible that we have to receive help from England for our Northern Ireland fishermen who have been so much under pressure. These problems are   all a result of what we see as EU fishing policy just not helping our fishing communities.

“I know that after this act of generosity that the fishermen will support the Fishermen’s Mission in the future when the fishing improves. People far and wide have really been impressed by what the Fishermen’s Mission have achieved in Ardglass in averting great hardship for many families who have quietly endured their lot. Even my sister in Bedfordshire has said that the shop she is working in will as part of their annual fundraising programme will run an event in support of the Mission. This just speaks volumes.”

Fishermen based in storm battered coastal communities are suffering the full impact of the recent severe storms. Opportunities to head to sea and catch fish have been rare.

Fishermen are either facing the difficult decision of putting to sea, risking life and dangerous sea conditions or being unable to pay bills. Many fishermen,

particularly those in coves, with tidal restricted harbours and those launched from beaches, have not been able to fish since December.

The Fisheremen’s Mission Superintendent in Northern Ireland, Maurice Lake,  said: The winter storms have prevented fishing, caused the loss of fishing equipment, smashed harbours and boats, and in extreme situations boats have sunk in the harbour around our coast in the UK.

“Fishing is a way of life that is passed from generation to generation. Many families are connected with fishing and for them life is very difficult indeed.

“During the bad weather Fishermen’s Mission Port Staff are working at full stretch to support fishing families providing practical and financial support.  Our partners at Seafarers UK have donated £50,000 towards our appeal and our friends are daily offering further support.   However, such is the demand for our help that we are very much in need of further donations.

“Immediate emergency grants will be made available to support Fishermen to help ensure rent, food and utility bills can be paid. The Fishermen’s Mission is committed to helping all our fishermen across our thre main ports of Portavogie, Ardglass and Kilkeel at this current time.  As many fishermen will be aware, we have limited manpower available and so the assistance we are able to offer will be on a port by port basis.

“We will be reaching out to all fishermen as soon as we are able.”

In looking at the future prospects of the fishing industry, Fisherman’s Forum Vice Chairman Martin Rice added there were other key factors involved making fishing more difficult. He said: “Our trawlers are rigged for prawn fishing in the Irish Sea and there is little else really that the fleet can diversify into to be sustainable. The white fish fishing has now virtually disappeared and many of the bigger boats converted to prawn fishing. But as the prawn quota has been cut year on year almost, this winter we are looking at a disaster. This has a wider knock-on effect to the processing sector and the local businesses in the east Down economy.

“And next year this problem will be even worse as there will be changes to the way we handle our fish discards. It will effectively mean that some of the trawlers will be tied up in port altogether. With changing weather patterns we are looking at stormier winters.

“If this happens we do need to know that the Single Boat Payment from government is in place. If that is so we can then plan training and boat repairs etc in this period, as the fleet ties up. This tie-up period copuld be an opportunity to make the fishermen more professional in their work. They could then receive payments for a period of several months to get them through the difficult spell. It is a time of great uncertainty in the industry. The bottom line is we are prepared to go out fishing but the weather and regulations are beating us.”

Marianne McGirr, wife of a local fisherman said: “I contacted the Fishermen’s Mission and they said they would come down and help local fishermen in need. When the word went out, the Mission were nearly inundated with appeals for help. This is a really serious problem among the who fishermen have just been hanging on by their fingernails until the fishing improves.

“Many families have suffered desperately and this has not been really visible as they are just too proud to ask for help. They are share fishermen… that means they live on what they earn as self-employed. They just batten down the hatches and hope and pray for better times ahead. But after several months, even the strongest will is tested and many are just at breaking point.

“I saw one fisherman in tears when he received  his cheque. It was  very humbling, and all I can say is the Fishermen’s Mission have done an excellent job in turning round a difficult situation in our fishing port and I know everyone really appreciates what they have achieved.”