‘The Girl From The Mill‘ by Chrissie Walsh.

Chrissie Walsh was born and raised in West Yorkshire, and after teaching there and in Jersey she married her trawler skipper husband who brought her to Killough in County Down where she has lived for more than forty years. Chrissie was a vice-principal in a school in the Down area for twenty-five years.

When she retired she set about fulfilling a life-long ambition to write. Her debut novel ‘The Girl From The Mill’, published by Head of Zeus/Aria Fiction was released on 3 January 2019 and is available currently as a digital version and as an Amazon POD (Print on Demand).  It has received top 5-star ratings from netgalley and Goodreads etc. Chrissie took two years to write her first full novel but she maintains her inner writing voice has been with her for a lifetime.

The Girl From The Mill’ is a heart-breaking saga for all fans of Dilly Court and Val Wood. As World War I begins, life will never be the same again.  In the drab Yorkshire town of Garsthwaite, Lacey Barraclough works hard in the textile mill, determined to fight for improvements to the dismal working conditions she and her fellow weavers face. This debut novel is also set against the activism of the Suffragette movement of that period. 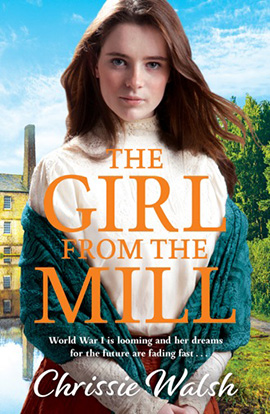 But Lacey had not reckoned on falling in love with the bosses’ son, Nathan who returns her love. But to succeed they must overcome the class divide, as well as persuade their families that their love for each other is real.

Before Nathan and Lacey can make a life together, World War I breaks out and Nathan enlists to fight. When Nathan heads off to the Front, he takes Lacey’s dreams with him, and she must find a new way to face the future. As hard times come to Garsthwaite, will there be a home for the returning heroes to come back to?

And for those men who do make it back from France, can they ever overcome the horrors they have witnessed, and learn to love again?

Chrissie Walsh said: “They say you can take the girl out of Yorkshire but you can’t take Yorkshire out of the girl. So even though I love my life in a little picturesque fishing village on the coast of County Down, my head is often far away in Yorkshire.

“I once read that if you are going to write, you should write about what you know, from within your own experience, and that’s exactly what I did in my first full novel. I enjoy writing about ordinary people… they don’t move mountains or make earth-shattering discoveries… but what they do is survive in a tough world, dealing with every day hardships. And, little by little, through brave words and actions they make their lives and the lives of the people around them all the better for it.

“The bygone mill towns of West Yorkshire with their towering mill chimneys looming over warrens of drab little houses, the smoke and the smell contrasting with the rolling moors that surround them, provide an excellent backdrop for the women I like to write about.

“When necessity demands it, they can be as tough as the moorland’s millstone grit, or as soft and gentle as a breeze wafting over it when it comes to loving and caring for family and friends. Proud, and for the most part unafraid, they found strength in unity, workmates and neighbours sticking together (even though they sometimes tore the tripe out of each other) in their fight against injustice.

“I come from a long line of such women: hard working, strong-willed, and talkative. Heavens, could they talk. It’s their stories that inspired my first novel ‘The Girl from the Mill.’

“Like Lacey Barraclough, they believed in fairness and equality and that the contribution they made to society, no matter how menial, should be considered worthy.  Whatever life threw at them, be it a petty annoyance or a family tragedy, these women ‘just got on with it’ but they never gave up the struggle.”

Chrissie explained she was a primary school a teacher for most of her working life. She added: “And now, when I’m not busy being a mother and grandmother, I write, or think about my writing. Long walks on the beach are great for developing plots and characters, and if I’m driving to school to pick-up my grandson or hanging out the washing or working in the garden, I’m a bit like a trawl net on a fishing boat catching words, images and feelings in my thoughts.

“Then, between the hours of 10pm and 2am I tap it all out, spilling words onto the screen and re-jigging them until I’m satisfied I’ve written what I wanted to say. Also, finding a fabulous agent such as Judith Murdoch and then being introduced to the super team at Aria has enabled me to fulfil a lifelong ambition.

“I initially sent the novel to a couple of publishers including Penquin and I am absolutely delighted that I have found someone who believes in the novel, and I have a four book deal. I’m now busy writing my third work and I’m still really enjoying it very much. Originally my agent sent it out to five publishers and two were very interested which was very encouraging.”

The Girl From The Mill can be purchased on Amazon as a Kindle book or a hard copy POD at:

The Girl From The Mill