<![CDATA[THE Ulster Automobile Club (UAC) has announced plans for an Easter Rally, which will feature as Round 2 of the Irish Tarmac Rally Championship and Round 3 of the Northern Ireland Stage Rally Championship.<a href="http://www.downnews.co.uk/wp-content/uploads/2013/02/motor-sport-copy.jpg">

Lisburn and Ballynahinch will be the anchor towns for the one-day event, which will cover twelve stages over a lengthy 100 competitive miles within the counties of Down and Antrim on Easter Saturday, 30 March 2013. Over 100 national and international competitors are expected to take part in the event, which will delight rally fans throughout Ireland who turn out in their thousands each Easter to enjoy a rally spectacle. The rally will start in Lisburn City Centre at 9.30am with the ‘ceremonial start’ that will see cars leaving Bow Street at regular intervals until around 11.30am. Chairperson of Down District Council, Councilor Mickey Coogan said: “We look forward to welcoming the Easter Stages Rally to Ballynahinch and are delighted to be supporting this exciting event. “This provides a unique opportunity for the thousands of spectators to witness the fantastic spectacle on our own doorsteps and enjoy the national and international rally drivers demonstrate their skills and abilities as they navigate through our beautiful countryside and finishing up at Market Square in Ballynahinch. “This too will provide a boost to the local economy which hopefully will continue with our extensive festival and events programme throughout the district,” he said. Ballynahinch will also host the rally service area where competing teams will be based throughout the day, at the Millbrook Lodge Hotel. [caption id="attachment_36552" align="alignleft" width="300"] 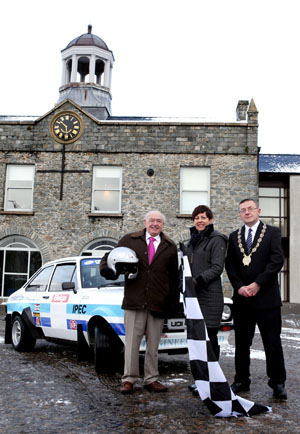 Lisburn City Council Economic Development Committee chairperson Alderman Jim Dillon, rally driver Caroline Spers and Down District Council chairperson Councillor Mickey Coogan in teh Market Square in Ballynahinch launch the Easter Stages Rally.
(Picture by Matt Mackey/presseye.com)[/caption] “I am delighted that Lisburn has continued its links with the organisers of the Easter Stages Rally,” said Alderman Jim Dillon, Chairman of Lisburn City Council’s Economic Development Committee. “We would hope that visitors and residents will come and witness over 100 race teams starting the rally in Market Square, Lisburn City Centre, and anticipate a busy morning for the City Centre shops with large crowds expected to line Bow Street.” The rally will conclude in Ballynahinch that evening with cars expected to arrive from 5.45pm onwards. The finish podium and customary spraying of champagne by the winners, will take place in the town centre at Market Square. Ballynahinch will also host the rally service area where competing teams will be based throughout the day, at the Millbrook Lodge Hotel. Chairman of the Ulster Automobile Club (UAC), Nigel Hughes said: “It was a huge disappointment when we realised the European Rally Championship would not be visiting our shores this Easter.  However, we are delighted that the Easter Stages national rally will run on the traditional date for the Circuit of Ireland. The Galway Rally last weekend, was a resounding success, with a huge entry. I think rally fans are in for a real treat this Easter Saturday.” Further updates may be found at at www.easterstages.net : www.facebook.com/easterstages, or Twitter@easterstages]]>