I should have known when I issued a plea for some runners to go a  long way for a run that it would be our 100 Miles in 24 Hours champion  Michael Cultra who would answer the call writes Joe Quinn. 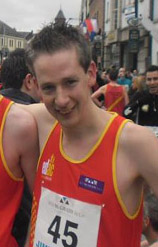 After those heroics last Summer who better to tackle the challenge of 200 miles in 4 hours – the round trip to Irvinestown and back – and run 5 Miles in the middle?

The instruction was drive to Irvinestown and find a dry field, which even in high Summer is quite a challenge in Co. Fermanagh, so the best we could do was find a slightly damp field, in the grounds of Necarne Castle, which is in fact a natural amphitheatre, providing views of every metre of the course to spectators.  This is one to mark down on the calendar for next year and it is hoped that by then a lot more EDAC members will have fully functioning satnavs – though the road is good and well signposted anyway.

However, a similar travel sickness affected most of the clubs from this side of the country and if the same kind of adventurous spirit had been prevalent in times past would Thomas Cook ever have turned a profit at all? So let’s put an end to the old chant that when the going gets soft, the soft stay at home! 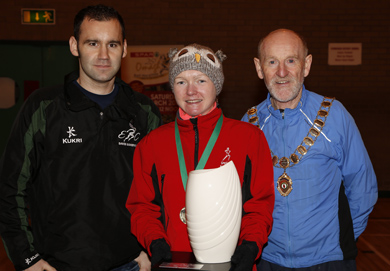 The Necarne Equestrian Centre was the venue for this new fixture in the ANI Cross Country League and in spite of the weather, distance and other competing athletics events there was a very good turnout in both the Men’s (65) and Women’s (59) races.

Both races provided fascinating tussles at the front with Sperrin Harriers Karen Alexander, winner of last year’s 3 Lakes 14K Challenge in Ballydugan, proving too strong for the recently crowned Intermediate champion Michelle Sturm and her club colleague Julie Butler in the Ladies race over 4.5K.  The Men’s race proved a tour de force for the tough Masters champion Stephen Duncan Omagh, who fairly romped home after an opening 2 lap challenge by Foyle Valley’s Scott Rankin had been slapped down with imperious ease. 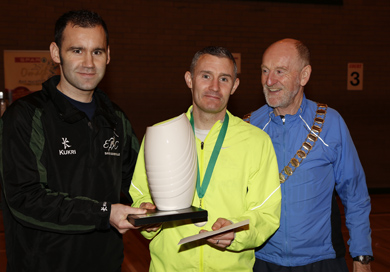 Michael kept his feet well to finish a splendid 18th place and was just getting warmed up and ready for another 90 or 95 laps when he was directed up the finishing chute.  This was a very good event at which East Down and Newcastle athletes could have featured prominently in the junior and senior races but unfortunately the field, whether  dry or damp, was left to the cream of the North West to dominate.

A little closer to home Daniel and Caolan Atkinson tried their hands, or sorry, their feet at the NI and Ulster Indoor Age Group Championships in Magherafelt with Daniel recording 2.41.69 for 12th place and Caolan 2.29.82 for 19th in the Under 15 Boys Under 17 Boys 800 metres respectively.

On Thursday night Paul Burns began his 40th birthday celebrations early with an impressive 7th place in the after dark 26 Extreme trail race in the grounds of the Stormont estate to prove that running life if not exactly beginning at that milestone, certainly continues and indeed can improve.

On Saturday Declan Teague repeated the placing in the Born2Run 10K at Minnowburn, where Linda Cunningham, Simon and Eithne McGrattan, Bernice McCann and associate member Mickey Cuningham also took part, although I swore I saw several of them on the road again on Sunday morning.

On Friday, a little further and drier south, Neil McCartan recorded 4.07 for the 1500 metres in the Athlone arena, just missing out on the bronze medal in the Inter Varsities championships.