<![CDATA[ <p style="text-align: justify;">A pupil from County Down has been named as a winner in the 12th annual Arts & Minds competition organised by the NASUWT, the largest teachers’ union in Northern Ireland.

Arts & Minds is a UK-wide competition aimed at promoting race equality and diversity in schools. Children and young people from primary, secondary and special schools are judged in two categories – art and creative writing. 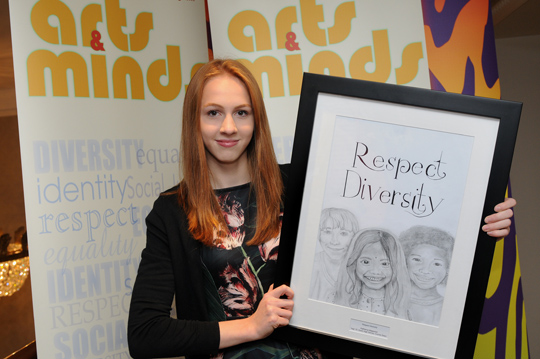 Congratulations to Katherine Magwood, a pupil at the Down High School in Downpatrick, who has won a UK-wide national art competition, Arts & Minds (Photo by Brendan Kelly/Mousetrap Productions).[/caption]

Katharine Magwood, a year 10 pupil at Down High School, County Down, was chosen as a winner of the secondary artwork category for her piece “Respect Diversity”.

Katharine picked up her prize at the 12th national awards ceremony in London today (Wednesday 14 October 2015).

Down High School Head Teacher Mr Paul Logal said: “Katherine Magwood is a very talented pupil who may be interested in pursuing film making as a career. I am delighted that her impressive piece of work has been recognised in this way and very grateful for the prize that has been awarded to the school.”

Chris Keates, General Secretary of the NASUWT, said: “Congratulations to Katharine, who clearly worked very hard to achieve her success.

“Every entry was highly creative and clever in its interpretation of the messaging behind the competition, so the judges had great difficulty in choosing the winners.

“The quality of entries is a credit to the skills and abilities of the pupils and their teachers and support staff.

“The NASUWT is proud to organise the Arts & Minds competition which is an effective and enjoyable way of promoting and celebrating cultural diversity.

“The NASUWT wishes to thank every pupil and every school who participated and helped to make the competition such a huge success.”

The awards ceremony was held on Wednesday, 14 October at the St James’ Court hotel, London.

The Arts & Minds competition is divided into early years, primary, secondary and special school sectors. Within each sector there are separate creative writing and art categories with individual and group prizes being awarded in each.

Each winning school receives £350 per category and every winning child receives a gift voucher. The 2015 competition is the 12th Arts & Minds competition.

The competition was conceived for the purpose of celebrating teachers’ and pupils’ artistic and creative writing skills as a powerful way of promoting discussion and debate among young people about important social and ethical issues.