This is an annual all-Island competition organised by Co-operation Ireland aimed at recognising and celebrating the vital contributions that voluntary and community organisations make to improving people’s quality of life in their area. 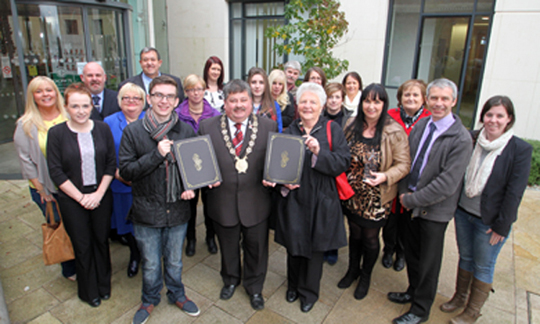 Members of the County Down RCN and the Downpatrick Community Collective receive a recognition from Down District Council Chairman Cllr Billy Walker for their success in the all-Island IPB Cooperation Ireland Pride of Place Awards.[/caption]

Having been visited by two judges from Co-operation Ireland in September of this year, County Down Rural Community Network in conjunction with Downpatrick Community Collective was awarded a top runner up accolade in the Urban Neighbourhoods Category of the main competition at a Gala Awards Ceremony in Ennis, Co Clare, on Saturday 15 November 2014, which over 1,000 people attended.

In recognition of their success in the competition, representatives of the Network and the Collective were invited by the Chairman of Council, Councillor William Walker, to visit the Downshire Civic Centre for a lunch time reception on Wednesday 3 December 2014.

In welcoming representatives of the Network and the Collective to the Council’s Offices, Councillor Walker said: “It was my privilege as Down District Council Chairman to attend the Gala Awards Ceremony at which I was absolutely delighted to see County Down Rural Community Network in conjunction with Downpatrick Community Collective being honoured with a prestigious Pride of Place Award.

“I would like to pay particular tribute to County down Rural Community Network for the tireless work it does across the whole of our district to help and support local community groups. The Network has contributed tremendously to the life of the district and so it was a great pleasure for me to join them on the stage to receive their award.

“The Network has helped so many groups across our district to access millions of pounds in funding to help improve and regenerate their respective areas. I know the groups from throughout our district which have benefited from the help provided by County Down Rural Community Network will be delighted that its efforts have been recognised in this prestigious competition.”

The Council Chairman concluded the visit by presenting two cheques for £250 each to Mrs Susan Welsh, Vice-Chair of County Down Rural Community Network, and Mr Macartan Digney, Vice-Chairman of Downpatrick Collective, in recognition of the Network and Collective’s magnificent achievement in the IPB Co-operation Ireland Pride of Place Awards.