<![CDATA[ <p style="text-align: justify;">Ards will be embracing its Ulster-Scots history this weekend at the Donaghadee Ulster-Scots Autumn Festival, organised by Ards Borough Council with support from the Ulster-Scots Agency. 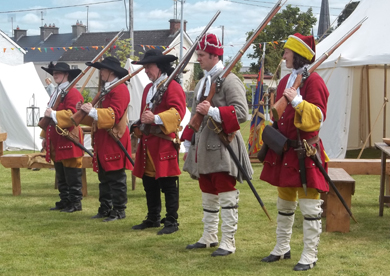 A blast from the past in Donaghadee last year.[/caption]

The highlight of the event will be a Living History Fayre taking place in the Donaghadee Community Centre Car Park and surrounding area on Saturday 18 October from 11am-4pm, looking back at everything Ulster-Scots and more and giving visitors the opportunity to explore a living history camp and see how people used to live, dress, eat and fight over the centuries.

There will be traditional family games, excavation boxes, craft demos, rope making, highland games, spinning, a Viking long boat, sword fighting and a First World War display to but name a few of the many family friendly activities taking place throughout the day.

The Festival also has Jenny Bristow will be cooking up a culinary storm as she demonstrates dishes with a taste of Ulster-Scots Thursday 16 October and ‘The Scots Arrive’ in Donaghadee Harbour to be greeted by an evening of entertainment at Lemons Wharf with music from Risin’ Stour and a spectacular fireworks finale On Friday 17 October.

The Mayor of Ards, Councillor Philip Smith, is looking forward to finding out more about our Ulster-Scots past. He said: “The Borough of Ards is keen to celebrate our rich Ulster-Scots history. Donaghadee was the gateway for Scottish families coming to County Down from 1606 with Hugh Montgomery and James Hamilton and continued to welcome our Scottish ancestors for many years to come.

“It seems only fitting that Donaghadee be the venue for the Ulster-Scots Autumn Festival which will give all the family an entertaining and fun take on our local history.”