<![CDATA[ <p style="text-align: justify;">SPEAKING at a full meeting of Down District Council tonight (Monday 25 March 2013), Newcastle area Councillor Carmel O’Boyle (SDLP) who had proposed an emergency motion to support St Patrick’s Primary School in Burrenreagh after it has faced a threat of closure from the Department of Education in a sustainability reshuffle, called for the Education Minister to intervene and reverse the decision.

School headmaster James Hunt, the Parents Teachers Association and the wider community are backing the school and a major row looms as politicians too are aboard the campaign. 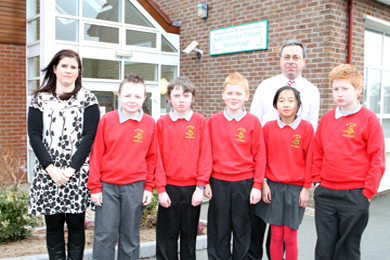 St Patrick’s Primary School pupils ar Burrenragh near Castlewellan, pictured with their Principal James Hunt and Classroom Assistant Siobhan Rice are supported by the wider community to oppose any proposals to close their school.[/caption]

A spokesperson for the Catholic Maintained Schools (CCMS) said to Down News: “Funding was not in place from the Department of Education when we were engaged with St Patrick’s Primary School. As the school entered the review process there was no funds available to support the investment of two mobile units which could cost around £100,000 each. The Department of Education has set out a level of 105 pupils in a school as a threshold for school sustainability and we have to work within the best use of resources.” Representatives from the school are contesting the issue of not receiving approval from the CCMS to move ahead and set up the classrooms in the school.

In presenting her motion, Councillor O’Boyle said: “The Department of Education has proposed the closure of St Patrick’s Primary School in Burrenreagh, not for reasons of inadequate educational provision, or for poor financial management, but simply because it is a small country school whose present enrolment is 52 pupils. Parents and staff are justifiably angry because other schools with even fewer pupils are on the list for possible mergers, yet St Patrick’s is to be closed.

“The school recently launched a new after-school facility which offers care to its pupils until 5.45pm. This provision has attracted new families, and the enrolment was increasing and showing great potential. In recent times, new pupils have moved from larger schools to St Patrick’s because as everyone knows, smaller class sizes produce better results. Even though the announcement of possible closure should potentially sound the death knell for the school, the opposite is true, with several families enrolling their children for September.

“This is a vote of confidence by the community for the school and its teachers. It is a matter of record that all of the pupils achieve their full potential. So, why has this school been earmarked for closure?

“St Patrick’s Primary School  lies in a rural district and we need schools like this to sustain our rural communities. In my view, the plan is short-sighted and mean-minded. And all the more short-sighted when we heard last week that the birth rate is on the rise, and a shortfall of 250,000 primary school places has been projected.

“If it is closed, the Department will be left with a school they cannot sell, pupils who are displaced, and parents who are inconvenienced. The children will be scattered to the four winds and will not be in classes with the children they play with at home.

“This whole situation has been exacerbated and compounded by the fact that the SEELB has been run since 2006 by four unelected and unaccountable commissioners who know nothing and care less about our local communities. This is a disgraceful situation that has been allowed to persist by this and the previous one, and it has meant that we have not been able to challenge outrageous decisions made over our heads.

“I propose that we write to the Minister, John O’Dowd, and put these points to him. The decision to close this school is undemocratic and has been taken without consultation with us, the elected representatives of this district. I propose that we include the points that I have made, and that we state unequivocally, that this Council rejects the proposal to close St Patrick’s Primary School in Burrenreagh, a school that has served generations of local people well and is at the very heart of that community.” 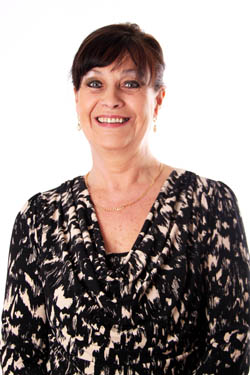 Councillor Carmel O’Boyle has gathered support from Down District Council to oppose the decision to close St Patrick’s PS at Burrenreagh.[/caption]

The motion was seconded by Councillor Maria McCarthy and passed unamimously with several amendments added by councillors.

What the Councillors Said

Councillor Patrick Clarke (Alliance) said: “I have made representations to DENI and I think we should copy our letters to the CCMS too. This is an excellent school and the results of its recent inspection have proven this.”

Councillor Willie Clarke (Sinn Féin) said: “There is a need to plan for the future in education. This issue is not just about numbers of pupils but about a whole community focussed around the school. Our Council needs to put forward a good case for the school highlighting its strengths but also acknowledging its weaknesses which can be addressed.”

Councillor Dessie Patterson (UUP) said: “We just can’t put all our children into towns and villages. We have to support rural life. I support the motion.”

Councillor Eamonn O’Neill, a member of the Board of Governors at St Patrick’s Primary School, said: “People need to be careful and not make judgements at this moment. This consultation is an attack on rurality. We need to be strong when defending such rural failure. I would refer to the case the school in Clanvaraghan which cause d immense damage to the community when it closed.

“As a rural council we need to defend the rural right to be educated in your own school.”

Councillor William Walker said: “The Minister will make the final decision. Many past Ministers have failed to listen to us. When the school consultation is being done we should ensure that all our local schools involved are included and their cases supported.”

Councillor Stephen Burns said: “The consultation response from Council has to include the range of schools from across the district.”

Councillor Terry Andrews said: “We are in a rural community and I support Cllr O’Neill’s views. We need to send out a message that we are not accepting this decision.”

In her summary, Councillor O’Boyle added that she was aware of a school in North Belfast that was previously given three year’s grace after being told initially it had to close. She said: “So why is St Patrick’s PS in Burrenreagh being issued with an abrupt edict for closure? I thank you all for your support and it is important that we on this and other related matters speak as one Council.

“We have until June to get our response right.”

There will be a meeting for the community, parents and supporters in St Patrick’s Primary School, Burrenreagh, at 7.30pm on Wednesday