<![CDATA[ <p style="text-align: justify;">The residents of Coney Island have formed a local community association to address some of the issues they have been faced with in recent years.

Almost every resident in Coney Island turned out for the inaugural meeting of the new community association. 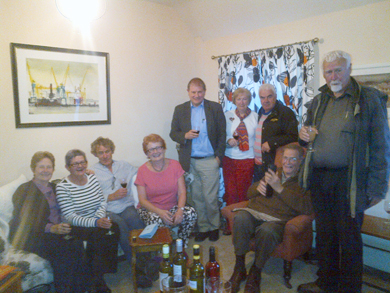 Councillor Cadogan Enright acted as the electoral chair and  of the meeting until the selection of committee members was completed. He said: “There are a number of issues locally which have spurred the formalisation of a community association. These included concerns about future flooding, the condition of Coney Island Lane, Council services, the future of local planning in the new ‘Supercouncil’ and most importantly the quality of water on Coney Island Beach”.

Chairman Moses Freedman added:  “We intend to campaign to overturn the NI Water decision to go ahead with a wholly inadequate, sub-standard upgrade of the Ardglass sewage works, and their decision not to accept sewage from the existing subpar and often inoperative works at Coney Island to be redirected for proper treatment at Ardtole.

“It is our understanding that the original plan was to have all the small villages in the area connected up to the Ardglass WWtW by adequate piping but this was pulled due to lack  funding.

“We are aware that several other villages in Lecale have been similarly excluded and denied the upgrading which is consistent with modern standards, and intend to support a joint campaign led by the Ardglass Development Association for a restoration of the original Lecale plan.

“We are currently looking at a number of key issues but are still consulting with all the neighbours etc so this may take a bit more time. Eventually we will have an action list of issues such as the shore flooding, road repair, bin collections, and other issues which we will then address.”

Councillor Enright indicated: “One of the reasons for the downgrading of the Ardtole project was that the NIEA had failed to identify any ‘Bathing Beaches’ in our district between Tryella and Strangford Lough. Many local communities have resolved to seek EU recognition for their beaches, and force the removal and correct treatment of sewage outfalls on beaches in this area, in a similar manner to North Down’s ‘Gold Coast. Residents in Ballyhornan held demonstrations outside their new sub-standard sewage station last year for the same reason.”

Residents also voted unanimously to support the new Killough Village planning process as the environment of Killough Bay is shared with Killough and most local facilities are shared between the two settlements. The new committee was delegated to make contact with Killough and ensure their views were included in any new local plan. It was noted that inclusion of ideas in a local plan can often facilitate later grants from Down Rural Area Partnership and similar organisations.

Health Minister Comments On Issues Of Our Cancer Services