<![CDATA[ <p style="text-align: justify;">Christian Aid has said it is looking forward to the ‘Strangford Sportive’ and called on local residents in the Strangford Lough area to join the hundreds of cyclists taking part in this major event.

The charity said there may be some minor traffic disruption on the day, and asked local residents to check the Christian Aid website for details of all the routes. 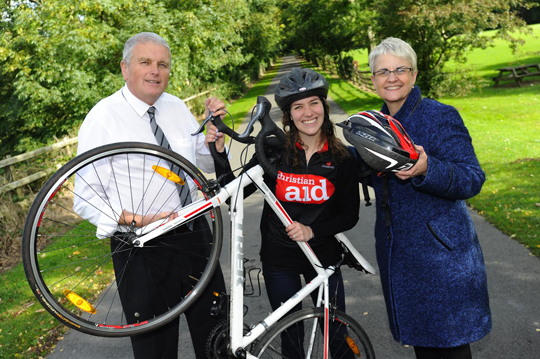 Sign up today: Christian Aid’s church and community officer Helen Newell, centre, is joined by South Down’s MP Margaret Ritchie and Jim Wells MLA who are lending their support to the Strangford Cycling Sportiffe which leaves Delamont Country Park near Killyleagh at 8am this Saturday.[/caption]

Experienced, amateur and ‘just for fun’ cyclists are invited to get on their bikes and take to the shores of Strangford Lough on Saturday 3rd October for a cycling challenge, raising funds for Christian Aid. There are three routes which take in towns and villages across south Down including Strangford, Killyleagh, Ardglass, Lisbane and Whiterock.

The ‘Strangford Sportive’, now in its third year, is expected to see hundreds of cyclists from all across Northern Ireland set off from Delamont Country Park, Killyleagh to take part in one of three routes offered – 120km, 80km or 40km – along marshalled roads around the picturesque drumlins of County Down. The event will culminate back in the park with a free BBQ provided by charity partner, the Good Little Company.

Helen Newell, Christian Aid’s Church and Community Officer, said: “If you live in the area, please help Christian Aid by being aware that there will be cyclists out on the roads between 8am and 3pm. If you’re worried about disruption, all of the details of the routes are on the Christian Aid website.

“This will likely be one of the last organised cycles of the season, so it is a great opportunity to get on your bike, have fun and, most of all, raise some valuable funds for the amazing work which Christian Aid is doing to tackle poverty around the world – all before the winter sets in.

“Through this exciting event we will be raising funds for our development work in poor communities around the world. An example of one special project we are supporting is the Rural Transport Network in Kenya where motorbike ambulances are being used to save lives every day. Volunteer community health workers like Rogers Ochieng Otieno travel to deliver mosquito nets, vital healthcare advice and medicines for people living with HIV. They also ensure expecting and new mothers have everything they need for the best start for their baby.

“The Strangford Sportive will be a very fun, rewarding day and I would urge anyone with a bike – no matter how basic or high spec– to sign up and take part. I would also like to take this opportunity to thank our generous event partners, the Good Little Company and Podium 4 Sport, and our volunteers who will be on hand to provide support to cyclists on the day.”

There is a suggested minimum donation for cyclists taking part in the event of £20 per adult. This donation will help Christian Aid to tackle the root causes of poverty as well as its symptoms, helping local communities, regardless of race, faith or gender, to help themselves out of poverty.

You can register today for the Strangford Sportive online at: