Burren’s festival may have been ongoing over the weekend, but it was their marquee forward Donal O’Hare, that edged his side to a five-point success over an encouraging Rostrevor in a captivating contest at rain-soaked St. Mary’s Park on Saturday evening. The evidence would suggest that the hosts were somewhat flattered with the margin of victory, but deserving of at least a win nonetheless, as their scoring power was the telling difference, particularly from O’Hare and his fantastic tally of 1-9. 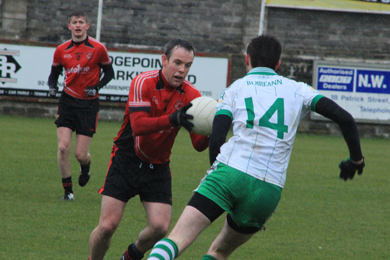 Having said that, Rostrevor were superb at times providing much promise, with three excellent goals providing encouragement and the performances of players in key areas leaving the eventual feeling that the Reds were perhaps a little unlucky not to expand upon their early supremacy in the contest.

The opening quarter was end-to-end, and the pattern of play saw both sides mount their own menacing attacks with success. Eamon Toner and Conor Fegan traded early points with the game sparking into life in the 6th minute with the first of some truly stunning goals finding the target; Burren taking the early initiative.

Cathal Foy was the scorer, as he carried possession out of a ruck on the 45-yard line to pace through and curl a tremendous effort into the corner of the net despite Jonathan Parr’s best attempts. However, and despite that setback, Rostrevor were coming out on top at midfield with the pairing of Caolan Mooney and Tomás Mulholland providing a platform for a series of Reds’ breaks. Mooney surged forward to fist over with Donal O’Hare’s free restoring the three-point Burren lead in the 10th minute; 1-2 to 0-2.

John Fegan’s contribution at centre-forward was extremely impressive for Rostrevor; particularly in the opening half and he was twice involved, as the Reds took control of the match entering the second quarter. The midfield duo were again key with both finding the net in quick succession.

Caolan Mooney’s pace was a vital factor in allowing him to race clear; playing a quick return pass with John Fegan before expertly placing the ball into the bottom corner on the stretch to equalise. O’Hare gave his side the lead once more with a free, but the ball was in the back of the Burren net once again in the 17th minute; this time through Tomás Mulholland.

John and Conor Fegan combined near the right end-line to find the well-placed Mulholland, who finished the ball to the net first-time with a fine palm. Conor Magee chiselled over a point from the ground to give the Reds a 2-3 to 1-3 on 22 minutes; but despite the same man almost finding the net with an audacious lob against a struggling Burren defence, Ryan Treanor and Donal O’Hare each registered scores to ensure that the hosts were only a point in arrears at the break.

Conor Fegan nudged Rostrevor into a two-point from the placed ball on the restart, but the gradual reclaiming of the contest from Burren started to manufacture, and Donal O’Hare; ably assisted by Ryan Treanor’s effectiveness as target-man, was at the fulcrum of everything positive in their attacking play.

O’Hare sent over two points to level the scores by the 34th minute before he found the net to place Burren into a three-point lead; all of a sudden it had seemed. The goal had Burren etched all over it with a swift short-passing move resulting in the ball being touched to the net by O’Hare from close in.

The hitman extended the lead to four points in the 37th minute to put the Reds’ backs to the wall, but the response eventually came, and it was sensational in its delivery. Conor Fegan showed well to receive Liam Fegan’s pass, before feeding possession inside to the onrushing Tomás Mulholland who showed composure of the highest order to crash a precise shot into the far corner of the net for his second goal of the match.

This narrowed the deficit to a single point; 2-8 to 3-4, but Rostrevor would never retake the lead, as Burren found the scores to seal back-to-back wins. Ryan Treanor settled the Burren nerves with an individual fisted point on the left side with Cathal Foy pointing from O’Hare’s lay-off to open up a three-point advantage.

Donal O’Hare’s second-half performance was of the highest quality, and it was really his accuracy that pushed Burren over the line. His free and a fisted point from Eamon Toner gave the hosts a five-point lead and; whilst Jordan Fegan’s impulsive point and a free from Conor Doyle brought the Reds back into contention, Donal O’Hare ensured that the final difference would be five, with two more frees. Despite the defeat, Stefan White would have been reasonably content with the Rostrevor performance, but he will also know that points are important at this stage of the season. Mayobridge are the visitors on Friday night. Burren, on the other hand, are away at in-form Ballyholland.