<![CDATA[ <p style="text-align: justify;">THE Irish Sea prawn and fish quotas have seen a swinging cut at this week’s Fisheries Council negotiations in Brussels on 16-17 December. The local County Down fishing industry is reeling at the prospect of a bleak year ahead for 2014. 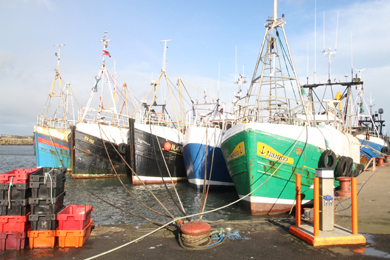 The fishing fleet in Co Down is stunned at the quota cuts from Brussels.[/caption]

NI Fisheries Minister Michelle O’Neill explained that this was “a difficult Council”. Fishermen in the County Down ports of Ardglass, Kilkeel and Portavogie had been waiting expectantly on the outcome having seen their fishing opportunities decreasing significantly in recent years although they have complied rigourously will all EU measures to date. The EU has now pressed one stage further in is quest for sustainability but the industry and NI representatives maintain this decision is not based on solid scientific evidence.

Minister O’Neill said: “This was a very tough Council with the Commission determined to see progress towards delivering the Common Fisheries Reform package and sustainable fishing. 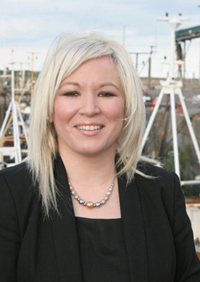 “We faced an initial proposal for a huge 24% cut in the quota for Area VII prawns and together with the south we pressed hard for a sustainable quota that reflected the scientific advice and fishing patterns. In spite of scientific advice that was only 8.4% less than last year, the Commission frustratingly sought a much larger reduction. Whilst I was successful in getting the cut down to 9%, there were enough member states prepared to accept the overall fishing opportunities package to allow the Commission to conclude a deal. This meant that in the end we are not in a position to make further progress.

“Nonetheless the figure we have ended up with is broadly in line with the scientific advice. I was pleased that the Commission agreed to our argument to no changes to the numbers of days at sea for our fishermen.”

The Minister added: “Taking the Council result as a whole, when we look across the range of our most important stocks in the Irish Sea, the reduction in the value of the quotas is just under £600,000. This was mainly due to increases in Herring, Anglerfish, and Hake.”

Northern Ireland Fish Producing Organisation (NIFPO) Chief Executive Dick James speaking after the EU Summit said: “One again the fishermen of Northern Ireland have taken a major hit from Brussels. The cut in the nephrops (prawn) quota for the Irish Sea means a loss in 2014 0f 2014 tons with a market valkue of £1.6 million. Coupled with a loss of 300 tons of prawns from the Clyde fishery the industry is facing a loss of £2 million.

‘There is a further loss of around £250,000 for whitefish. The Cod quota has been cut by 33%, Haddock by 33% and Whiting by 22%. The ROI is in a similar position – last year they fell short of prawn quota and had to buy 650 tons from the French and they overfished.

“If you add up all the combined losses due to quota cuts it amounts to an effect on £6 million across teh fishing industry which includes losses to processing facilities onshore. This is nothing short of a disaster.

“The herring quota was agreed last year and increased by 5% which will mean a market boost opf £75,000 approximately.

During the 2013 season the NI fleet fishing around 11 weeks due to bad weather. During these weeks they fished 90% of the quita available. With this prawn quota cut of 9% next year will be much more severe especially if it turns out that it is a good year for prawn harvesting. Technically we could run out of quota well before the end of the year.”

SDLP MP for South Down, Margaret Ritchie, has described a cut in the prawn quota for next year as another blow for the fishing industry. 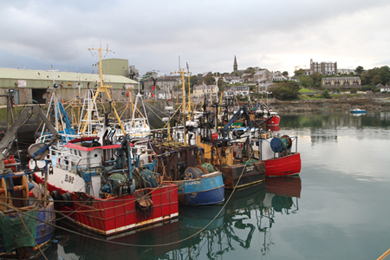 The fishing sector in Northern Ireland will be hard pressed in 2014 as a result of quota cuts.[/caption]

Ms Ritchie said: “News that the EU has imposed harsh and unreasonable cuts on the fishing effort and our local fishing industry is very disappointing. Any progress made in recent years in relation to fisheries and fleet management could, I fear, be placed in jeopardy as a result of these harsh cuts.

“These cuts have been imposed with no regard of the progress made by the local industry in recent years and the high level of cooperation from the local fishing fleet on working toward a sustainable future for fishing.

“We must look to the future of the industry and it is important an early meeting with the EU’s Fisheries Commissioner Maria Damanaki is arranged to discuss in detail the actions of the EU and how this will impact on our local fleet, which has been praised by the Commissioner for the tremendous strides it has made over the past two years in identifying and adopting a range of measures designed to secure sustainable fisheries.

“I will also be pushing for the management of the Irish Sea  to be placed on the agenda of the British Irish Council where, ahead of next year’s negotiating round, discussion can take place directly been the British, Isle of Man, Scottish and Irish Governments about the needs and requirements of each regional fishing industry. It is vital the regions work together to ensure an environmentally and economically sustainable fisheries strategy for the Irish sea.”

The DUP’s Diane Dodds MEP has expressed her dismay with the outcome of the EU’s December Fisheries Council, which ended in Brussels on Tuesday evening.  This Council meeting, which decides fishing opportunities for the year ahead, concluded after two days of negotiations between the European Commission and Fisheries Ministers from across the European Union.

Mrs Dodds said: “Whilst I would like to say I was shocked about the negative results of the Council, especially in respect of the 9% cut in the quota for prawns, Northern Ireland’s most important catch, I was not.

“Since learning of this revelation I had discussed the matter with, amongst others, the UK’s Fisheries Minister George Eustice MP and it was clear that Mr Eustice together with his UK Ministerial colleagues did not share the opinion of the Irish Minister.  Nevertheless, the UK team at the Fisheries Council, including the Northern Ireland Minister Michelle O’Neill MLA was on the ‘back-foot’ from the start of the negotiations as a result of an Irish mistake.

“I agree that all fishing quotas should be based upon sound scientific advice and the scientific evidence on prawns confirms a stock that is both stable and being managed within maximum sustainable yield principles.

“As well as that I understand that at the start of the Council meeting the EU’s Fisheries Commissioner singled out the Irish Sea and in particular Northern Ireland’s fishermen for praise for delivering upon commitments they had made two years ago to deliver sustainable fisheries in the Irish Sea.  Their reward for this hard work is to see the quota for prawns in the Irish Sea, as well as the quotas for all demersal fish stocks in the area cut by up to 32%.

“Of course we welcome the increases for other potentially valuable fisheries including hake and I call upon DARD to ensure that rules will be put in place that will permit our fishermen to avail of fishing opportunities for these and other whitefish species.  The small increase on the Irish Sea herring quota is also welcome and I look forward to seeing this fishery awarded with the Marine Stewardship Council’s certification for sustainable fisheries during 2014.

“The outcome of the December 2013 Fisheries Council was a bad result for Northern Ireland’s fishing industry and I am glad Michelle O’Neill MLA seems to have acknowledged that.  The reality is that our fishermen and fish processors have again been let down by a decision making process that allows Fisheries Ministers from across Europe to have more influence over fisheries policy in the Irish Sea than what the UK’s Ministerial team does.” said Mrs Dodds.

The cut in prawn quota could be the start of a long slippery slope for the Northern Ireland fishing industry.[/caption]
]]>