Cavan were gifted home advantage for this very important tie between two teams who will be battling it out next year in Div 2 and on their last meet in the Ulster Semi-Final, Down came out comfortable winners writes Barry McConville. 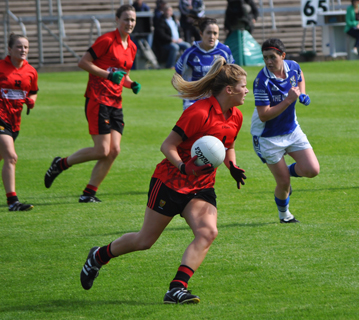 Down faced a strong Cavan side on their home turf.[/caption]

Down have been the underdogs throughout 2013 and going into an All Ireland Final it was not going to be any different. Cavan prior to this match were fancied to win and with home advantage and a substantial home crowd literally just walking to the ground from the town, it was obvious that the Down girls were on the back foot before they even got off the bus.

Down opened the scoring with a Lisa Morgan point from play but it was soon cancelled out at the other end by Cavan much to the delight of the partisan crowd. Down worked very hard throughout the first half with Clara Fitzpatrick and Meghan Doherty taking some lovely high ball in a show of top drawer fielding by Down.

However, Cavan had their shooting boots on and took their chances when they came, with Bronagh Sheridan getting two goals in the first half. It could have been more but for the lightening reflexes of the Down keeper Katie Farrell of Rostrevor. Farrell made three crucial save in the first half and was crucial in keeping Down in the game going in at the break.

From the outset of the first half Cavan showed their wile, drawing free after free from the Down girls by easily going to ground instead of brushing of a tackle and moving on. It was a tactic that paid dividends for Cavan and they were able to control the pace of the game and they used the higher proportion of frees they were awarded to put in place set plays and ultimately out score Down.

The second half was dominated by a resurgent Down, with Morgan, Ferris, Cunningham and McArdle all getting on the score board, but Down shot 13 wides in total throughout the game, while Cavan cancelled out the Down point tally by scoring a further two goals in the second half.

The Cavan keeper wasn’t tested at all and her kick outs were easily being gathered up by the Down midfield but Cavan played a better tactical game, again drawing frees, allowing Down to come at them and using a blanket defence to disrupt and frustrate the Down attacks. In the end the stats speak for themselves. Down had the majority of possession in the second half. Cavan had the majority of frees awarded. Down shot 13 wides and Cavan won by 13 points.

Cavan progress to an All Ireland Final v either Fermanagh or Tipperary who meet next week. Fermanagh, like Down will have to travel into the lion’s den of Semple Stadium Tipperary. However the eventual winners will have learnt a lot about this Cavan side that failed to shine in their own backyard.

The Down Ladies Class of 2013 management and players can hold their heads up proud. They’ve achieved  tremendous success since they embarked on this season’s journey in October 2012, starting with gruelling early morning runs up and down the Mournes, I’m sure they’d rather forget, and culminating in a League title, an Ulster Final spot and an All Ireland Semi-Final, not bad for the underdogs. We look forward now to the 2014 season with Down back playing Division 2 football and who knows, maybe the lessons learnt from this year will stand them in good stead and they’ll take it a step further in 2014. Well done to all involved!

Photographer For The Stars Sets Up Studio In Newcastle

Be Active For Your Health Says NMD District Council

Photographer For The Stars Sets Up Studio In Newcastle

October 31, 2020
We use cookies to ensure that we give you the best experience on our website. If you continue to use this site we will assume that you are happy with it.Ok