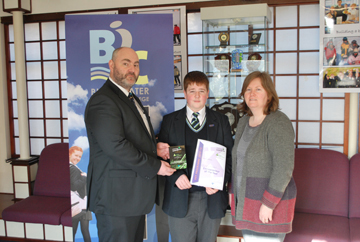 Blackwater Integrated College student Alastair Campbell is congratulated by Acting Principal Alan Hutchinson and teacher Allyson Cockfield.[/caption] Blackwater Integrated College student ,  Alastair Campbell was recently announced as Entrepreneur of the Year on the 2012-13 KEY Programme, organised by Young Enterprise NI. Alastair and ten other students from Blackwater, participated in three residential courses also involving students from Belfast and Monaghan.  Students undertook a range of activities to develop their business skills and their abilities to work in teams.  They also had a day’s training in interview skills then experienced mock interviews carried out by local business people. As Entrepreneur of the Year, Alastair now has the opportunity to compete for a place on the team that will represent Northern Ireland in Canada in the summer.]]>