<![CDATA[ <p style="text-align: justify;">“We are all set to go with the Irish Game and Country Fair at Birr, Co Offaly, on 29 – 30 August,” said the organisers of the biggest and best Game Fair in the country.

Fair Director Albert Titterington from near D0wnpatrick, said: : “Birr Castle’s game fair in County Offaly is already the top fair in the Irish Republic. Historic Birr Castle is the backdrop and the public love the fair’s unique style. There are special treats planned for Birr such as non-stop entertainment, surprise acts and attractions, top competitions of all descriptions, enormous prize funds and of course a huge tented village of trade stands from Ireland and the UK. 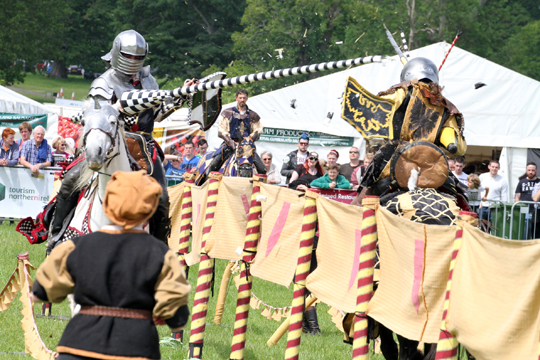 Crash, bang, wallop! The knights of the Les Amis d’Anno do battle with lances.[/caption]

“Hunting, shooting, gundogs and fishing are always placed centre stage at the Great Game Fairs of Ireland and in 2015 all facets are enhanced including the competitions having prize funds unrivalled in Ireland.

“In clay pigeon shooting there are three guns to be won, including everyone who shoots goes in to a draw for a fabulous shotgun sponsored by Francesco Morelli from Casale 2000 Ltd and the NARGC have put up some excellent cash prizes for NARGC members. And once again gundogs, terriers, lurchers and whippets provide fantastic international competitions and entertainment.

“We are very proud of the fact that we try to cater for everyone from countrysports enthusiasts to the youngest member of the family and all ages in between.”

Here is just a taste of what’s in store at the Birr Fair: 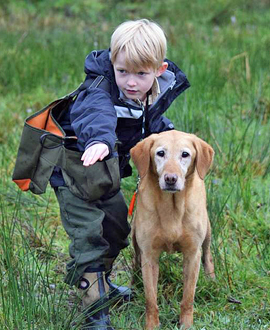 Jinior dog guru Cole with his dog Chloe in action.[/caption]

A BIRR FIRST – YOUNGEST EVER DOG TRAINER TAKES CENTRE STAGE We even have the youngest ever gundog trainer – possibly in the world – when 8 year Cole Mathews in the Main Arena with his gundog act for the very first time at Birr. Cole will be in the Main Arena with Chloe, his Labrador gundog which he trained himself to exhibition standard.

TERRIERS, LURCHERS AND WHIPPETS The top lurcher, terrier and terrier shows and racing this year have the best ever Irish prize fund. Just some of the exciting competitions are:

*  The FINAL of the RED MILLS /IRISH COUNTRYSPORTS & COUNTRY LIFE FIVE NATIONS TERRIER CHAMPIONSHIP JUDGED BY A THREE JUDGE SYSTEM WILL TAKE PLACE IN THE MAIN ARENA AT 5.00pm.

CLAY PIGEON SHOOTING Some of the biggest clay pigeon shooting prizes in Ireland will be on offer. Even novice and rough shooting shots have a chance of winning some of that prize pot, including amazing shotguns up to €1,500.

Anyone who is an FAC holder can shoot at the 50 bird sporting shoot and they’ll not only get the chance a chance to win super prizes but, even if they miss all 50 clays, they’ll still go into a draw for the Caesar Guerini shotgun worth nearly €1,500 sponsored by Casale 2000 Ltd.

Anyone who enters the 10 bird pool stand and 50 bird open over the 2 days can enter their score card for a free draw for the Caesar Guerini shotgun.

GUNDOGS Gundog enthusiasts are exceptionally well catered for with something for novice competitors and those with more experience and theres a really exciting ‘handling challenge’ when the top two retrievers face the top two spaniels in a final showdown.

LIVING HISTORY AT THE FAIR

The Great Game Fairs of Ireland team have a reputation for bringing Irish history to life and in 2014 the Medieval Jousting Tournament was a real crowd pleaser. It is repeated this year with a visit from the top UK team ‘the ‘Knights from the North.’ They will join Vikings and all sorts of military re-enactments in the Living History Village.

Vikings raided the monastery in Birr in 841 AD and It is thought that the current castle is built on the site of an Anglo-Norman one from the period 1066 – 1170 AD. The O’Carroll family ruled from this until Sir Laurence Parsons built the current one in 1620. And a little bit of NI culture in that the Ulster Scots Agency are sponsoring the music in the lIving History Village by the group Chanter

FAMILY FUN There are a huge number of attractions for the whole family including a childrens’ area, lots of have-a-go activities including archery and air rifle shooting; an action packed main arena programme sponsored by the NARGC and a huge tented village of trade stands packed with bargains and quality products including a Fine Food Pavilion with cookery demonstrations. And there’s a really great shopping experience for everyone with nearly 200 traders – all with at least one bargain.

THE BIRR CASTLE ATTRACTIONS World famous gardens, Science Museum, the Great Telescope and the largest tree house in Ireland – all are open to the public during the days of the fair.

WORLD CLASS VENUE FOR THE FABULOUS BIRR FAIR Albert Titterington added: “When you add the famous Birr Game Fair welcome to all that we have in store for the public, I am absolutely certain that everyone will hugely enjoy the fabulous entertainment, fine food and much more in what is rightly acknowledged as a world class location.”

The Birr Fair is supported by Failte Ireland and the National Association of Regional Game Councils.

This event at Birr Castle follows a highly successful fair held at Shane’s Castle in Antrim at the end of June which saw record attendances.

Check out the website at: www.irishgameandcountryfair.com [caption id="attachment_58426" align="aligncenter" width="540"]