Seventeen year-old Bethany won a gold medal at the 2012 Paralympic games in London in the S14 100 metres backstroke final. She always participated in the Shoebox Appeal in school and is lending her support now so that every child can experience Christmas. Bethany said: “I always did a shoebox in school and I think it’s a great project.  I’m supporting it because every child deserves a chance to enjoy Christmas.”
Team Hope is a leading Christian development charity working with needy children in Eastern Europe, the former Soviet Union and Africa. The charity works in co-operation with the people of Northern Ireland, and with overseas partners to make the Christmas Shoebox Appeal happen.
[caption id="attachment_32463" align="alignleft" width="300"] 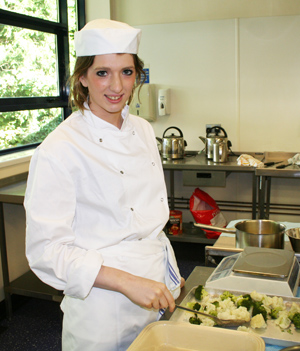 Paralympic gold medal swimmer Bethany Firth pictured at work in SERC in her catering course.[/caption] The charity works with everyone, irrespective of race, religion, ethnicity or background, believing that everyone in need is equally deserving of receiving help. Team Hope does not make distinctions on any other criteria apart from need.
Team Hope is calling on schools, families, communities and businesses to help turn just another day in a child’s life into something special. People are being asked to wrap an old shoebox with Christmas paper, fill with gifts for a child, attach £4 and bring it to a local drop off point before 11 November.
The aim is to deliver 200,000 shoeboxes from the island of Ireland into the hands of needy children in Africa, the former Soviet Union and Eastern Europe, whose families typically live on less than €1 per day. This year, seven new countries have asked for shoeboxes, and for many children it is the only Christmas present they will receive.
According to Niall Barry, Team Hope Executive Director, the Christmas Shoebox Appeal has delivered gift-filled shoeboxes to 2.8 million deprived children in twenty-one countries over the last 14 years. He said: “We help bring joy, laughter and hope to children living on the margins of society, victims of war, disease or poverty in some of the world’s most underdeveloped countries.”
In the receiving country the Team Hope network of partners delivers the shoebox gifts right into a child’s hands – in hospitals, schools, shelters, churches, orphanages, community centres or family homes.
For more information about the Team Hope Christmas Shoebox Appeal, to get involved or to find your nearest drop off point visit:
www.teamhope.uk.com
Did You Know?
*   2.8 million needy children in schools, orphanages, hospitals and homes have received Christmas shoeboxes from Ireland since 1998.
*   167,717 shoeboxes were packed last Christmas and sent to Armenia, Burundi, Congo, Croatia, Kosova, Lesotho, Moldova, Swaziland, Romania and Ukraine.
*   the boxes were packed by over 2,000 volunteers in 49 centres all around Ireland.
*    nine 40-foot trucks took the boxes to Eastern Europe travelling an average of 4 days each.
*   twelve 40-foot containers travelled by ship to Africa and took about three  weeks.
Items that are best to gift:
• School items – like a pen, pencil, copybook, paper, colouring book, felt pens, sharpener, eraser, solar calculator.
• Hygiene items – toothbrush and toothpaste, soap (wrapped please), facecloth, hairbrush, comb.
• Clothing items – a hat, scarf, gloves, socks or underwear.
• A treat – sunglasses, game, small Irish gift, a photo of yourself, sweets (must be in date until at least March 2014), make up, a small musical instrument, toys like a doll, a car, cuddly toy, skipping rope, yo-yo, a finger puppet.
]]>