<![CDATA[ <p style="text-align: justify;">Alliance Councillor Patrick Clarke has called on Libraries NI to carry out essential repairs to the Market House now Castlewellan Library which will celebrate its 250th anniversary on 12 June.

Last year Cllr Clarke asked Libraries NI to repair the roof and damp issues as well as repainting and decorating the Market House in time for the historic milestone of the building being 250 years old. 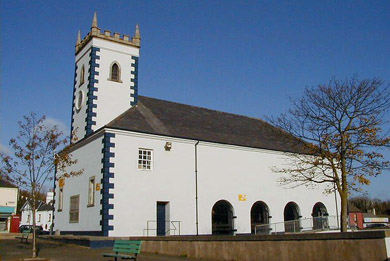 Expressing his dissatisfaction with the Market House not being presented in its best light on its important anniversary,: “I am very disappointed after I raised the maintenance issues with Libraries NI back in late 2013 and hoped fro these to be completed for this celebratory and  historic milestone.”

“I have been advised that an achitect and structural engineer/surveyor has been appointed ‎and the property has been surveyed and inspected to establish the cause of the water penetration and identify remedial action required.

‎”The main issue identified relates to corroded cast iron guttering and physical roof damage and the proposed project is to remove entirely the existing roof, replace the existing defective built in guttering and reroof using the existing slates. Following this a period of drying out will be required before redecoration can be successfully carried out.

“NIEA are being consulted in relation to the Listed Building status but the usual requirement of replacing like for like materials, authentic re-instatrement,  will require some specialized items to be sourced/manufactured e.g. bespoke guttering to match existing guttering.

“However I do welcome that the Market House roof will be completely repaired and ‎reslated as well as the cast iron guttering being replaced and the water penetration and damp issues also being fully addressed and redecorating and painting being completed.

“The necessary remedial works will hopefully leave the Market House as a Listed Building in a better and preserved state and I welcome that Libraries NI have consulted with the NIEA to ensure that the materials used are similar to the original ones being replaced,”  added Cllr Clarke.