<![CDATA[ <p style="text-align: justify;">A brave Downpatrick 89-year old pensioner has spoken out following her ordeal after she was burgled by two men in the early hours of Saturday morning.

Edna Calvert, a retired nurse who worked at the Downe Hospital for thirty years, said this was the third time she had been burgled in fifteen years, but the first time she had been at home when the burglars broke in.

Mrs Calvert, coping well with the ordeal, received a visit from Downpatrick area Councillor, Naomi Bailie, Chair of Newry Mourne and Down District Council, who presented a bouquet of flowers to her on behalf of the people of the area.

Recalling the incident, Mrs Calvert said: “I was just getting ready to go to sleep before 1am. I heard a noise downstairs and walked down to the landing to check it out. Two men appeared. They were wearing scarves and hooded so it was difficult to see them properly in the dark. They had gone into my garage and took out a spade which they forced a window open with. 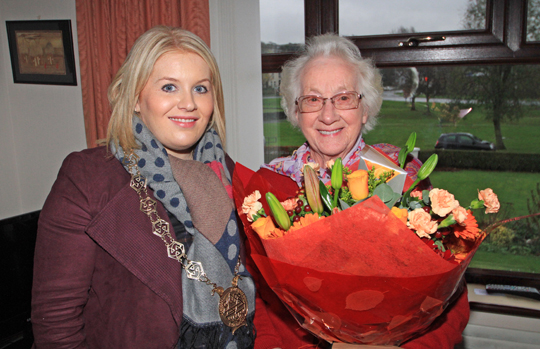 Newry Mourne and Down Down District Council Chairperson Cllr Naomi Bailie presents a bouquet of flowers to Enda Calvert from Roughal Park in Downpatrick who was burgled.[/caption]

“It was a surreal experience. My heart was racing yet I remained calm and didn’t provoke them in case they attacked me. I told them to put on the light so they could see what they were doing but they wanted to rummage through my rooms in the dark. There were no valuables in the house and very little money. I told them that and said they were welcome to anything I had. They even took some sleeping tablets that I had.

“They kept saving ‘Where’s the gold?’ I certainly didn’t have any. They eventually got into a wardrobe where I had boxes of shoes which they emptied out. Then they came across a small heavy bag which they took away with them. Inside was two ladies bowls and a tartan cloth which the police said they later recovered.

“Incredibly I felt sorry for them and said that they did not have to make life difficult for other people. They were basically quiet, but when I saw one of them holding a screwdriver in his hand and looking very uptight I did fear for my safety but tried to remain calm. The other burglar tried to calm his partner down. It was definitely a very scary experience.

“I was standing for a while on the landing in my house jacket and bare feet and didn’t really know what they were going to do. There had been a couple of burglaries in other homes in Roughal Park in the past year and as most of the residents there are elderly, I think many will now be in fear of crime coming to their doorstep.”

Mrs Calvert praised the quick response of the police who she said were at her home in seven minutes. “I phoned the police just after they left and they were at my door quite quickly. The detectives have spoken to me and someone has called out to look at securing my home more.

“These burglars need to be caught and put before the courts, but I am afraid that the judges just seem to let them off the hook and I think the law is to blame for a lot of this recurring sort of crime.

“I would certainly urge anyone who experiences a burglary like this to remain calm and not to provoke the burglars. They could be on drugs or have mental health problems. The most important thing is to come out of it safely and keep your cool no matter how afraid or angry you are.

“I feel that I can talk about this burglary now, but I would not like to go through this again. It was frightening.

“And I would like to thank Councillor Naomi Bailie and for presenting me with this beautiful bouquet. It was very thoughtful of everyone.”

Downpatrick  Councillor Naomi Bailie (Sinn Fein) said she was “sickened” to hear about the late night burglary on an elderly woman in her home in Roughal Park.

“As  Council Chairperson, attacks like these leave already vulnerable people feeling scared in their homes and that is unacceptable.

“I would urge anyone with information about this burglary to come forward to the PSNI so that these people can be brought to justice. This is such a cowardly act and those responsible should be ashamed of themselves.

“Only last week we had the sad news of how a similar act in Camlough ultimately claimed a man’s life. This lady is fragile because of her age and unfortunately unsavoury characters like this will use that as an opportunity to prey. People in Downpatrick and the wider area should remain vigilant, especially in the run up to Christmas and report anything that looks suspicious to police.

“I visited Mrs Calvert to present her with a token on behalf of the people of this district, to show her that the vast majority of people in Newry Mourne and Down are good people who utterly condemn this act, and that they send her support and keep her in their prayers at this difficult time. Some of the members of my party got together as they were incensed at what had happened.”

Detectives in Downpatrick are appealing for witnesses in relation to a Light Blue Nissan Nivara, registration UAZ25.

This vehicle was stolen in a burglary at Saintfield Road, Lisburn, in the early hours of Thursday morning, 19 November, 2015.

The vehicle is also believed to be linked to a burglary at the home of an elderly lady which occurred in the Roughal Park area of Downpatrick at around 1.45am on Saturday, 21 November 2015.

The Blue Nissan Nivara is a pick up truck with a flat cover below the cab with a roof rack.

It is believed that this vehicle has been in the Downpatrick area since it was stolen on Thursday morning, 19 November. It was found burnt out in the Fountain Street area of Downpatrick in the early hours of Sunday morning, 22 November.

Detectives would like anyone who may have seen this vehicle to get in contact with them on 101.

Detectives are also appealing for two people who may have seen persons walking away from the burning Nivara in Fountain Street area on Sunday morning to contact them.