Ballynahinch 3s v Bangor 2s
Harden Cup Final – 11th May 2013 Ballynahinch 3’s 24   Bangor 2’s 10 Richard Hart reports from Ballymacarn Park After two changes of venue, a lucky ‘toss of a coin’ saw Ballynahinch 3’s earn a home draw for the Final of the Harden Cup on Saturday 11 May. In conditions that swung from hurricane-like to a summer’s day, the two teams stepped onto a rain soaked, but playable pitch as a sizable crowd from both Clubs gathered to watch what would be an exciting Cup Final clash.  A youthful, if under-strength, Ballynahinch 3’s received the kick-off playing towards Sleive Croob and went straight on the attack. [caption id="attachment_38934" align="alignleft" width="390"] 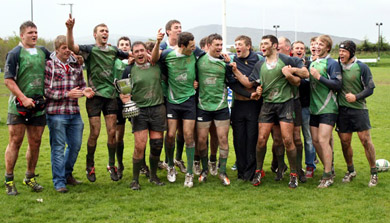 The Hinch 3’s who lifted the Harden Cup.[/caption] The early pressure paid off as after several phases of great forwards and backs interplay, the ball was offloaded to the charging Zac McCall who burst through the Bangor defence to dot down in the left corner, giving Hinch the first points on the board.  Robbie Irvine made a great effort with a very difficult conversion, only to be defeated by the swirling wind.  (4 minutes played – Hinch 3’s 5 – Bangor 2’s 0) Hinch’s second try came 3 minutes later as Jordan Graham again broke the Bangor line with a very strong individual effort, finished off under the posts for Robbie Irvine to add the extras. ( 7 minutes played – Hinch 3’s 12 – Bangor 2’s 0) A long period of close play ensued in the middle of the pitch as both teams fought the conditions and each other, with ball retention proving difficult, but Hinch managing to stay in command. On 21 minutes, Zac McCall, in an impressive individual effort, broke the Bangor line for a second time to score under the posts. Robbie Irvine again added the extras. Bangor recovered their own kick-off and went on the charge into Hinch’s 22.  The ball was recycled and the Bangor prop Schofield, with a huge individual effort carrying several Hinch defenders, used the momentum of his lone charge to make the Hinch line. (26 minutes played – Hinch 3’s 19 – Bangor 2’s 5). Aaron Samuels, the Hinch 3s stand-in Captain, was yellowed carded on 29 minutes for an infringement at a ruck and Bangor used their extra man to maintain the pressure on Ballynahinch as their winger Foulkes broke through the Hinch defence to score. The conversion was missed. Bangor maintained their pressure for the remainder of the half, but the resolute Hinch defence, lead by Ian Dornan, Hinch’s new Club President, held strong until the referee blew for the end of the 1st half. The second half started with a long period of static play between the 22s as both teams suffered in the wet conditions, as ball handling suffered greatly.  Both teams scrummaged well, but the lighter Hinch pack managed to come out on top, taking several balls against the head. On 65 minutes, Hinch counter-rucked exceptionally well, with the ball being moved well to Jordy Grattan, allowing him to turn on the gas and break through the Bangor defence to score in the Bangor right-hand corner.  Robbie Irvine was again defeated by the windy conditions, missing the extras. (65 minutes played – Hinch 3’s 24 – Bangor 2s 10). The final 15 minutes of the match saw Ballynahinch defend their lead and when in possession of the ball, look very threatening. The prevailing weather conditions became steadily worse and both teams welcomed the final whistle. Ballynahinch 3’s stand-in Captain Aaron Samuels received the Harden Cup from Past President Norman McBriar to round off a fantastic season having won both the Crawford and Harden Cups and the Junior League Title. Team: C Saunders, J Graham, J Grattan, C Kirk, F Birt, R Irvine, B McMullan, Z McCall, M McKeown, M Adams, R Lusk, A Simpson, A Samuels (Capt), C Phillips, K Hamilton. Replacements – D Steele, I Dornan, L Spence, G Gill, G Murdock
]]>