<![CDATA[ <p style="text-align: justify;">* The Under_10 Camogs were in a sunny Pairc Esler on Sunday morning for a County Camogie Blitz. A great show from the young ladies who are developing really well. The apt description given was “the girls played brill (Betty)” showing some great skill. Well done to Cora, Aislinn, Holly, Beth, Niamh, Chloe, Molly, Caleigh and Amber. Keep it up girls, you are doing your parents, coaches and club proud writes Martin MaClean.

* Well done to the young Under-6 footballers who entertained us all at half-time in the senior game on Friday night. There is no substitute for the enthusiasm shown by the young players who made their parents and grandparents proud. Well done to you all.

* The Under-10 Hurlers of the Town know a star when they see one. They all headed for “Magic” Johnston after the recent semi final win over Meath in the Christy Ring Cup two weeks ago to get their hurls autographed by the big man. At the weekend Down Senior Hurlers won the Christy Ring Cup Final in a sun splashed Croke Park with a splendid victory over Kerry. An absolute thriller which started and ended with a bang and a Down goal each time to clinch the title. And who provided those big moments – you’ve guessed it, Big Magic! A lesson for us all in that we should play to the end and not give up. The smiling faces from those who don’t get to grab the limelight and worked hard without the success or recognition was a joy to see. An Dun Abu!

* There is some casual bar work for those club members interested in doing some shifts. Please contact Miceal Crilly for further details. 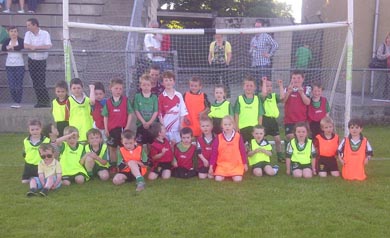 The young footballers who entertained at half-time.[/caption]

* The Senior footballers were pushed all the way last Friday evening in the local derby clash with the Liatroim Fontenoys. Before the game the large crowd and both teams observed a minutes silence in memory of young Kevin O’Hare and Colin Polland who lost their lives so tragically the previous weekend. The added spice of the local derby narrowed the gap in the respective league position positions. It was a tough, fair, hard hitting game. Liatroim will feel they deserved at least a draw and the Town will feel they should have pushed on building up a healthy lead in the first half. Thankfully we held our nerve and recorded a win by the narrowest of margins. Next senior game this Thursday night up in Longstone.

* The Senior Ladies Footballers recorded another impressive win this time against Saval ladies on a warm Saturday night in St Malachy’s Park. With a pretty depleted squad you would have forgiven Jim for thinking that his young team would come out on the wrong side of a result to an experienced Saval outfit. His chargers did not let him down and recorded a five point win. Well done to Jim and the Senior Ladies.

* The Seconds Footballers recorded another good victory this time over Clonduff on a hot Sunday afternoon in St Malachy’s Park. It was a good eight point win and the lads showed a good work rate in the hot conditions you can only say is tough as it was for all teams playing in the welcome good weather that has been amiss for some time.

* This year’s Kellogg’s Cúl Camps dates in Down have been finalised. We will be hosting Cúl Camp the week of Monday 22nd July – Friday 26th July. The camp runs from 10am – 2.30pm daily with a nursery camp running from 10am – 12.30pm daily. The camp is open for children who will be entering Primary Two in September to 13 years of age. Kellogg’s GAA Cúl Camps provide boys and girls with an action-packed and fun-filled week of activity during the summer holidays which revolves around maximising enjoyment and sustaining participant involvement in Gaelic Games.  The cost for the camp is £35 for first child (2nd/3rd/4th….£30 each) and nursery camp is £25 per child. Each child will receive a free GAA kit. You can either register on-line atwww.gaa.ie/kelloggsculcamps or register in the social club on Thursday night between 7.30pm – 9pm or Saturday morning from 10am – 11.30am or following the clubs sponsored walk this Sunday 16 June 2013. Please note children whom are attending the nursery camp are unable to be registered online. 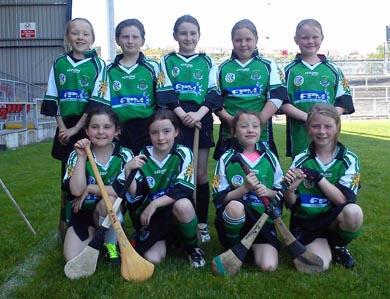 The U-19 camogs at Pairc Esler.[/caption]

* Last Saturday night a senior footballer could be seen running down the road from his place of employment. He didn’t want to miss this.  No it wasn’t a show or a match on TV. He was out through the door again and heading for the Club! He got in on time for the start of Mrs & Mrs. The show did not disappoint all those in attendance. A truly fun night and straight away a big thank you to the four couples who made it such an enjoyable night for all. Thank you to Kevin, Brian Cillian and Ronan for all their hard work.

* The Attack Fitness Circuits will continue in The Club on Thursday evenings at 7.00pm. There will also be classes in the Park on Saturday mornings at 9.00am.

* The Castlewellan AC weekly runs continue every Tuesday and Thursday leaving the Club at 7.00pm.