<![CDATA[ <p style="text-align: justify;">KELP seaweed could be an important biofuel in the future if research being conducted through Queen’s University Belfast’s EnAlgae project shows that it can be grown on a sufficiently large scale.

The work in the Narrows is attracting global interest, but EnAlgae, is keen to ensure that local people are also well informed of developments.  Dr Karen Mooney, EnAlgae Project Manager at Queen’s Marine Laboratory in Portaferry commented on how important algae (seaweed) could be as a global fuel in the future. She said: “The Strangford Lough Maritime Festival will be one time when members of the public will get a chance  to come out to the pilot site where we are actually growing seaweeds in the Lough, meet the scientists and find out more. 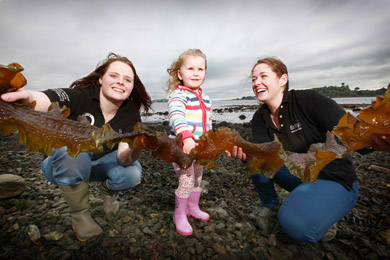 Lucy Roddy aged 3, (centre), spends some time on the shore in Portaferry learning about the different types of seaweed from Emma Gorman, (left), a member of the EnAlgae team and Dr Karen Mooney, Project Manager with EnAlgae, a programme within Queens University Marine Laboratory[/caption]

“We can use seaweed to generate simple biogas or use more refined methods to produce liquid gas or biofuel, as well as using the residue as fertiliser so there is no waste from bioenergy production, which is also carbon neutral. Over the weekend we will be describing the cultivation of local seaweeds from spores and baby seaweeds in the hatchery right through to how we constructed our longlines and use them to grow the adult seaweed – which can grow as tall or taller than a human at up to 2m!  Seaweed cultivation is an historic activity on the Lough and we are hoping to use this knowledge and the expertise of local communities in developing a sustainable source of biomass for biofuels”.

This is an EU INTERREG IVB funded North West European network with a pilot site at Queen’s University Marine Laboratory which is experimenting with growing kelp seaweed as a source of bioenergy.

The government has committed to an increase to 20% in the contribution of energy from renewable sources by 2020. The EnAlgae project combined with the SeaGen wave turbine and the Minesto Sea Kite device puts the Narrows of Strangford Lough and Northern Ireland at the forefront of marine renewable energy research and technology in the UK.

Caroline Nolan from the Strangford Lough and Lecale Partnership  organising the Festival said: “The Lough’s incredible ecosystem provides a wonderful living laboratory for scientists and the techniques developed here could allow people to create seaweed gardens for this potentially very valuable crop, in the future.  Seaweeds may not only be used as bioenergy but also to improve sewage waste water treatment, provide natural harvests of nutritious foods and raw ingredients for the pharmaceutical and cosmetics industries.

“During the Festival people will also be invited to explore the shore and be astonished to find kelp fronds as big as trees, to discover fish living out of water under a blanket of cool seaweed, or to learn that many seaweeds can live for decades.

“Large scale commercial harvesting does not take place in Strangford Lough where seaweed is an essential component of the internationally important and protected ecosystem”.

The world’s oldest known tidal mill was also built in Strangford Lough, at Nendrum, on the northern shores. It was built by monks in the seventh century  to capture the tides’ energy to grind corn. Those same tides are estimated to move 300 square metres in and out of Strangford Narrows with every tide and are some of the fastest in the world at speeds of up to eight knots. This power, the relatively sheltered conditions and the proximity to the grid make the Narrows of Strangford Lough an ideal setting for marine renewable energy research and development.

The Strangford Maritime Festival is organised by the Strangford Lough and Lecale Partnership, sponsored by EnAlgae, (a North West European network with a pilot site at Queens University Marine Laboratory which is experimenting with growing kelp seaweed as a source of bioenergy), with funding and support the Heritage Lottery Fund, Department of Culture, Arts & Leisure, Ards Borough Council, Down District Council, Northern Ireland Environment Agency, Department of the Environment and the National Trust.

For many of us seaweed is something that squelches unpleasantly underfoot or which we occasionally eat in the form of dulse.  While we rarely think of the great underwater garden which seaweed creates, seaweed is a vital part of our coastal eco-system as well as a much under-rated resource.

A Rich Heritage of Environmental Benefits from Strangford Lough

In Strangford Lough alone there may be as many as 200 different species of seaweed, yet just a few are evident to the casual observer.  We tend to see the large quantities of dead seaweed which accumulate on the strandline.  They may be unsightly to some but they provide a rich habitat for sandhoppers and tiny insects which in turn are food for birds and other small creatures.  As it rots the seaweed puts valuable nutrients back in to the Lough.  Only divers see the colourful and gracefully swaying underwater forests of live plants writes Dr Karen Mooney.

Our ancestors were much more clued in to the benefits of seaweed than we are. Evidence suggests the Irish have gathered and feasted on seaweed for food since the Middle Ages – the original sushi chefs!

Along the coast by Greyabbey you can still see the remains of the straight stone walls which delineated the areas where individuals had the rights to collect kelp from the shore and around the Lough’s shore there are many stone grids which were constructed by farmers to encourage the growth of seaweed for use as fertiliser on their fields.  Seaweed was once collected and burnt in kelp kilns and processed for use in glass making and linen bleaching.  The remains of these old kelp kilns can be seen on Taggart Island and at other places around Strangford Lough.

One custom handed down from those times is that of eating dulse (also known as dillisk) which is full of iodine, vitamin C and other valuable nutrients.  It has what I call the ‘Marmite Factor’, as it’s something you either love or loathe!”

Interest in seaweed is enjoying something of a renaissance as new generations recognise the health giving properties of these ‘sea vegetables’.  Carrageen, kelp (or kombu), sweet kelp (kombu royale), Irish wakame, sea lettuce, sea spaghetti and, of course, dulse are among the favourites in the kitchen.

The name ‘seaweed’ suggests weeds that are worthless – but they are far from it.  Whatever their name, they are a rich source of essential vitamins and minerals and sea plants have a greater iodine content than land plants.

Seaweeds can be used in salads, stocks and soups, as garnishes and in wonderfully flavoursome breads.  Many of us will have eaten seaweeds without even realising it. Carrageen, or Irish moss as it is sometimes known, is a natural setting agent that is often used as an alternative to gelatine. The strong flavour that carrageen has when fresh disappears once it has been bleached (usually by exposure to sun and rain), making it a completely flavourless substance used as a thickener and stabiliser in many foods.

The fibre ‘alginate’, found in sea kelp and already used in small quantities in food as a thickener could bring an additional magic.  Recently a team from Newcastle University found that alginate from seaweed added to bread, biscuits and yogurt can reduce the amount of fat absorbed by the body by up to 75 per cent!

There have been many other health benefits ascribed to seaweeds (or “sea vegetables” as some people prefer to call them), some scientifically proven and published in peer reviewed literature, others as anecdotal information.  Overall, sea vegetables have a proven record in healthy living.

NI Executive Updates On Action To Deal With Covid-19