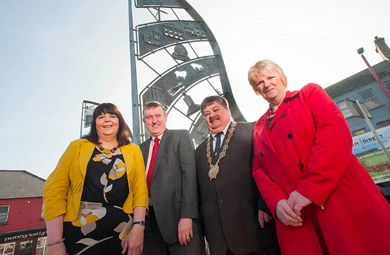 The Public Realm scheme has seen much-needed improvements to footpaths, street furniture, planting and lighting throughout the town centre. While in Ballynahinch the Minister also viewed the progress of a new £200,000 Revitalisation scheme for the town.

Minister Storey said: “Ballynahinch is an excellent example of the difference Public Realm projects and revitalisation initiatives can make to our local towns. Together these two valuable investments have given new life to the commercial heart of Ballynahinch to the benefit of everyone who works or shops here.

“The investment by the Northern Ireland Executive in these two schemes is the culmination of a lot of hard work and planning. Ballynahinch town centre is now a more attractive and pedestrian friendly environment with high quality civic space. I am sure that these improvements will encourage more business activity and future growth as such schemes help build confidence amongst local traders and re-energise the future prospects of our towns.”

*  upgrading of footpaths; *  increased and improved lighting provision; *  under-grounding of overhead services; *  additional street furniture and foliage throughout the town; and *  refurbishment of The Square and public art features. 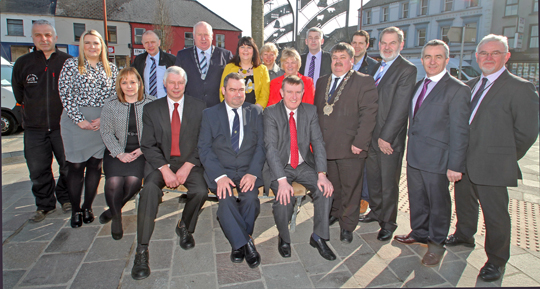 Local politicians, Council and community representatives with DSD Minister Mervyn Storey in Ballynahinch as the Public Realm works come to a close.[/caption]

The £200,000 Revitalisation scheme will complement the Public Realm works by supporting existing traders, improving shop fronts and promoting the town as a must visit market town. Work is due to be completed shortly.

The Minister added: “This investment will help to deliver economic regeneration and demonstrates a continued commitment from the Northern Ireland Executive to the regeneration of our town centres.”

The £2.1million Ballynahinch Public Realm scheme was funded by the Department for Social Development at a cost of £1,744,188 with Down District Council contributing £325,000.

The Revitalisation scheme currently underway includes shop front improvements, a branding and marketing initiative as well as Christmas lighting. The Department is contributing £200,000. The scheme is being delivered by Down District Council and will be completed by 31 March 2015.

Cllr Anne McAleenan, Chair of the project Steering Committee, was delighted with the delivery of the scheme and said in her address in the Market House: “As Chairman of the Ballynahinch Public Realm Steering Committee I am delighted to join you at this Official Celebration to mark the completion of the public realm scheme and also the shop front enhancement project.

“As the Chairman of Council has mentioned, we were delighted when the Department for Social Development agreed in 2013 to provide funding to implement a Public Realm scheme in Ballynahinch. The Ballynahinch area Councillors have long campaigned for improvements to be made to our market town and we saw the design and implementation of an environmental improvement scheme as a crucial start which would lead to further exciting developments for our town.

“A steering committee, chaired by myself, was established to take the project forward and the hard work really began. All of the Ballynahinch area Councillors were nominated to sit on the committee and I extend thanks to my fellow Councillors Micky Coogan, Garth Craig, Walter Lyons and Patsy Toman. The Councillors were determined to have as many infrastructure projects as possible delivered at the same time to minimise disruption to the local community and traders.

“In order to achieve this we invited all of the relevant statutory agencies to join the steering committee. This partnership approach allowed us to undertake major improvements to the water mains, electricity and telephone networks. Thanks are extended to the NI Water, NIE and BT representatives who sat on the committee. We were extremely fortunate in being able to enlist the valuable assistance of local representatives to sit on the Steering Committee and sincere thanks are extended to Mark Murnin and Johnny Quinn who represented the business community.

“Their role in liaising between the local businesses and the steering committee was invaluable and facilitated a very useful communication process. Thanks are also extended to our consultants Darren Price and Conor McGeown of White Young Green and Anthony McGuigan of the Paul Hogarth Company.

“I also would like to recognise the community involvement which has led to the final design of our scheme. We undertook a number of consultation events to ensure that our proposals would reflect the hopes and aspirations of all the people of Ballynahinch. The valuable input of the local business community is greatly appreciated as is their patience whilst works were on going outside shops. I recognise that there was inevitably disruption to businesses during the implementation of the works and I hope that now that the scheme is completed that the disturbance was worth it and that the local traders are happy with the improved streetscape.

“There are exciting times ahead for Ballynahinch, we have completed the environmental improvements and the Revitalisation Shop Front scheme but that is only the beginning of the transformation of our town. The Ballynahinch Masterplan, which we launched along with you Minister last October identifies many projects which are yet to be delivered.

“Finally, as we enter into the new Council of Newry, Mourne & Down I would like to see Ballynahinch continue to benefit from funding to ensure that the good work began here acts as a catalyst to further regeneration. There is still a snagging list to work through with the companies involved the Public realm scheme will soon be finally completed and help shape the future of Ballynahinch.”

Cllr Garth Craig (DUP), said: “Ballynahinch is looking a much more attractive town now that the shop front scheme is completed. I am delighted that so many traders in the town availed of the funding to update, repair and paint their shop fronts. This work compliments the recently completed paving scheme and I hope that businesses in the town will benefit from the work.

“Although there is much more work to be done in regard to the economic regeneration of the town, I’m glad that this work was completed just before the old Down District Council ceases to exist at the end of March.”

Cllr Robert Burgess (UUP), said: “I am absolutely delighted with the Public Realm scheme. It has been a long road for the Ballynahinch traders and difficult at times, but we are ready now to reap the benefits of it all. I look forward to better times in Ballynahinch.

“When the road by-pass is eventually completed, it will make a huge difference to the town. I notice the many small towns on the road from Newry to Dublin are now booming since the main motorway was build as drivers stop off en route to their destinations.

“Ballynahinch is half way between Belfast and Newcastle and I expect footfall in the town to increase if we can also improve the parking in the town.”