<![CDATA[ <p style="text-align: justify; ">Thefts of agricultural machinery and vehicles may be greatly reduced with the new Road Guardian.

Jim Shannon, MP for Strangford, speaking at the launch of Road Guardian at Titanic in Belfast said: “I have been involved with this tracker project for some seven years and am convinced that it will lead to vast safety improvements on our roads and reduce theft of vehicles. 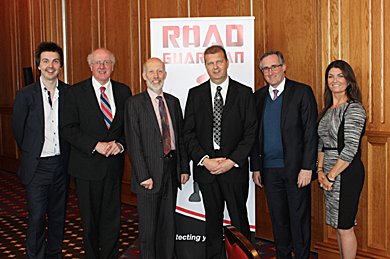 “Already this year, the tracker security device has enabled £11 million worth of vehicles to be returned to their owners and has seen 80 people arrested as a result. This is clear evidence that the security device can help reduce unsolved crime and can be a part of ensuring that those who are accountable for carrying out these debilitating criminal actions are held accountable.

“This is a wide-ranging partnership between PSNI, UFU and Crimestoppers, NI Rural Partnership and of course Road Guardians. Those who have expressed interest are Taxi Drivers, young drivers, lorry drivers and farming machinery owners. The introduction of the tracking device that includes a camera within the car or can monitor the attitude of the driver and driving habits and also monitor the driving behaviour of other vehicles. When the insurance company takes a driver on they can monitor the conduct of the driver and with improvement can reduce their insurance premiums.

“The launch of Road Guardian is a novel method to help reduce insurance premiums, to improve security of vehicles, to reduce theft and after some seven years of work by DETI and other bodies as well as the innovators, we can now all benefit from Road Guardian’s tracker device.,”  added Mr Shannon.