<![CDATA[ <p style="text-align: justify;">Down Arts Centre is delighted to announce that local writer Donal O’Hagan will bring his new play, The Kitchen, the Bedroom and the Grave to DAC on Friday 7 March at 8pm.

Produced by Accidental Theatre, The Kitchen, the Bedroom and the Grave comes to DAC following a run at the Grand Opera House and province-wide tour. 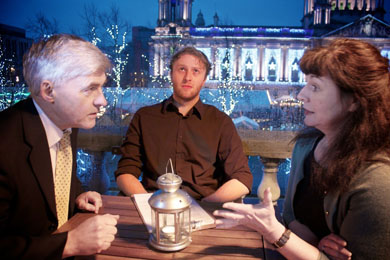 The Kitchen, the Bedroom and the Grave, written by Donal O’Hagan will show at the Down Arts Centre.[/caption]

Up-and-coming young journalist Dempsey loves his London life but is suddenly shipped home to Belfast to make a documentary on the changing face of Northern Ireland.  A Christmas visitor at best, Dempsey has his fingers crossed for a quick job and a leap up the career ladder. But his parents and oldest friend have their own agendas for him, and soon Dempsey is forced out from behind his camera.

Donal O’Hagan was born in Belfast, studied in London and worked as a teacher in London and Paris. He now lives in the beautiful town land of Saul in County Down. His Northern Irish stage premiere is a multimedia exploration of homecoming that brings candid insight to issues of family and identity in Northern Ireland. The play asks how far a person can author their own life, and cuts to the heart of core questions we face as individuals: nationality, sexuality, and responsibility for family.

Speaking about the play, O’Hagan said: “It’s a play about life… who we are and what we do. The play captures an aspect of my own personal experience. At the time of writing I had returned from London and I was dealing with transition and with deeper questions of balancing personal freedom with demands of community, faith and culture”. Excited about the possibility of bringing some key issues we face in life, he said: “What a play can do above other art forms and the impact it can have is powerful, but there’s also a responsibility to give opposing ideas full weight with all sides fully represented as much as possible”.

The drama has a superb cast including Maggie Cronin, best known for her role in the BBC’s long-running daytime drama, Doctors, and Academy award-winning short film The Shore; Cillian O’Sullivan, currently starring in 6 Degrees; Noel Magee from the BBC production Betrayal of Trust, and upcoming Lyric Theatre actor Jason McLaughlin.

To purchase tickets (£10 / £8) and for further information on any Down Arts Centre events, please contact the box office on 028 4461 0747. The complete Down Arts Centre Season Programme is available to download at :