<![CDATA[ <p style="text-align: justify;">With the countdown to the Circuit of Ireland International Rally gathering pace the organising team are pleased to confirm today that two of Europe’s brightest young stars, Craig Breen of Ireland and Dutch driver Kevin Abbring, will be in a rapidly growing entry list.

With just three weeks to go until the European Rally Championship comes to Belfast for the first time, the names of former World Super 2000 champion Breen, from Waterford, and ex-FIA Institute Excellence Academy member and Junior WRC event winner Abbring, were announced as definite starters at a launch event held today at the Titanic Drawing Offices in Belfast. 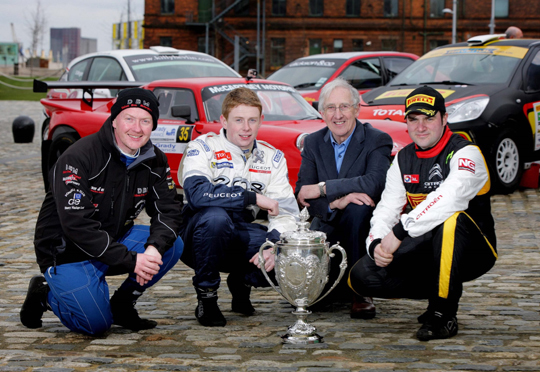 Rally drivers Ashley Dickson, Stephen Wright, Dessie McCartney and Daniel McKenna at the launch of the 2014 Circuit of Ireland Rally which will take place from Thursday 17 April to Saturday 19 April across counties Antrim and Down (Matt Mackey/Presseye.com)[/caption]

Both Breen and Abbring, who drive for the French Peugeot Rally Academy team, are currently in Greece preparing for the start of the Acropolis Rally tomorrow evening. The Greek round will see Abbring and Breen debut Peugeot’s new R5 category car, the 208T16, which has been extensively developed by Breen and Irish World championship star Kris Meeke over the past 12 months.

“It’s been very exciting being involved in the development of the new car and I know that fans from all corners of the country are eagerly anticipating seeing it,” said Breen. “There is always a buzz around the Circuit of Ireland but it feels particularly special because it is the only round of the FIA European Rally Championship in the UK and Ireland.

“My co-driver Scott Martin and I are entered in the second round of the Dunlop Irish National Championship next week and we intend to use that event as an extensive tarmac test session before taking on our European rivals at Easter.”

SKODA’s planned participation on the Circuit of Ireland Rally is also significant for the event. The Fabia S2000 has been a dominant force in international rallying for several seasons with Juho Hanninen leading home a famous one-two-three for SKODA when the Circuit of Ireland last took place in 2012. The United Kingdom is also a very important market for SKODA, meaning a visit to Belfast would be very attractive to the Czech company.

This year’s event, which will be held from Thursday 17 April to Saturday 19 April, is one of 12 rallies in the FIA European Rally Championship calendar and will be the only round of the championship in the UK and Ireland. Around 130 drivers are expected to take part. Broadcast by Eurosport, the rally is expected to attract over 10 million viewers across the globe. It is anticipated that the Circuit will generate over £1 million for the local economy.

Speaking at the rally launch, Event Director Bobby Willis revealed that the competitors taking part will come from all over Europe, including Holland, Germany, France, Belgium and the UK as well as Finland and the USA but will also include many local drivers such as the youngest Donegal International winner Sam Moffett in an RRC (Regional Rally Car) Ford Fiesta, his brother Josh in a Mitsubishi Evo and Ireland’s recent Billy Coleman Young Driver Award winner Stephen Wright in an R2 Peugeot 208.

The national rally which runs alongside the international event, and is part of the premier Irish Tarmac Championship, will see drivers ranging from five times Circuit winner Derek McGarrity and current Irish national champion Declan Boyle in their powerful WRC cars to 70-year-old Dessie McCartney from Bangor, the 1980 Ulster Rally winner, who is expected to be the oldest driver taking part. He will drive a lightweight Darrian sports car.

Bobby said: “We’re hoping to see thousands of really fans come out and support this fantastic event – one of the oldest rallies in the world – and now a key fixture in the European Rally Championship calendar. There are many opportunities for the public to spectate, as the course is set to cover more than 230 kilometres across counties Down and Antrim.

“From the qualifying stage at the picturesque Ulster Folk & Transport Museum to the ceremonial start at Belfast City Centre and the service park at Titanic Belfast, as well as many towns and villages, the atmosphere is set to be electric.”

Enterprise, Trade and Investment Minister Arlene Foster, who attended today’s event, said: “There is huge interest in this newly revamped series and the event will help raise the profile of Northern Ireland, not only for those who come here to see the rally for themselves but also to TV audiences across Europe and the world. “As well as being able to watch high profile drivers battling it out, viewers will also see pictures of the spectacular landscapes, beautiful scenery and tourism landmarks in counties Down and Antrim. Tourism Ireland will be working hard in our European markets to capitalise on the promotional opportunities these pictures and the rally will create. “The historic Circuit of Ireland is one of our finest home-grown sporting tourism events and I congratulate everyone involved in keeping this premier rallying experience at the top of the agenda for drivers, spectators and visitors alike. As the clock counts down to Easter, I know the drivers and organisers are gearing up for the event and are pulling out all the stops to make this year’s rally the best yet.”

Bobby Willis added: “Entries are flooding in and I’m delighted to see there’s some fantastic local and international drivers among them. As well as Abbring and Breen we’re thrilled to see other big names including new British champion Jukka Korhonen, from Finland, and Laszlo Vizin from Hungary on the list. Monaghan’s Daniel McKenna, this year’s Pirelli Star Driver will be breaking into his British championship schedule to take part.

“The Rally also counts as Round Two of the new-for-2014 FIA ERC Junior Championship which is a very exciting development and we will see young drivers like Alex Parpottas, Petter Kristiansen and Gino Bux, who was chosen from over 200 young drivers to benefit from scholarship support from the Belgium Motorsport Federation, taking part. We are also pleased to welcome Jan Cerny, the winner of the inaugural event in Latvia last month.”

Record holder Jimmy McRae, seven times winner of the Rally, said he was delighted to travel from his home in Scotland to attend today’s launch event.

“The Circuit of Ireland is very special to me. It was the first major event I won back in 1980 after an epic battle with Ari Vatanen in my DTV Chevette HSR. It’s a great event and one that drivers both from Northern Ireland and further afield are really looking forward to. The fans here are amazing and will help to add to the fantastic atmosphere over the three days.”

The Qualifying Stage of the Rally will be based at Ballycultra Village, Ulster Folk & Transport Museum on Thursday 17 April, followed by a ceremonial start at Belfast City Hall that evening.

Spectator Stages will take place in Newtownards on Friday 18 April and Lisburn on Saturday 19 April. Downpatrick and Montalto Estate in Ballynahinch will be regroup areas on Friday while on Saturday Banbridge and Hillsborough will play host to teams regrouping. (exact times below)

Entries for the 2014 Circuit of Ireland close on Tuesday 1April.

Organisers are in the process of finalising arrangements for what promises to be a bumper weekend of motorsport and the management team is calling for additional volunteers to join the existing team of marshals.  For more details and to register log onto

For up to date information on the 2014 Circuit of Ireland visit:

Where can I see the Rally?

round of the FIA ERC to be based in the UK and Ireland ·        Will be broadcast by Eurosport – expected to attract 10 million viewers ·        Anticipated the Circuit will generate over £1 million for the local economy ·        First held in 1931 and is one of world’s oldest rallies after Rallye Monte-Carlo ·        For up to date details visit www.circuitofireland.net ·        Entries close 1st April ·        Maximum of 130 cars ·        The Circuit features the FIA ERC  International Rally and the National Rally ·        Manufacturers represented will include Peugeot, Ford, Skoda, Citroen, Renault teams