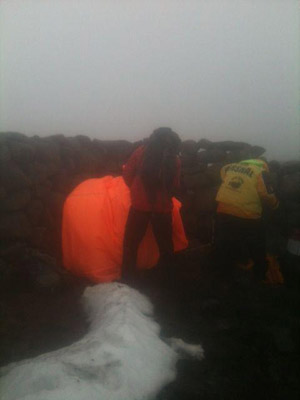 A runner is rescue after suffering from exhaustion and exposure in the Mournes.[/caption]

Rescue in the Mournes

At approx 15.30hrs on Saturday 13 April the the Mourne Mountain Rescue Team received a request for assistance from a mountain runner suffering from exhaustion and exposure. The male runner who was taking part in a British Championship Race got into difficulties close to the summit of Slievenaglogh.
Race marshals and team members in the area provided immediate assistance followed by support from the team. The casualty was stabilised before being able to be evacuated to road access and transferred to further assistance.
Twelve team members responded and were later stood down at 18.46hours.
(The Mourne MRT is a voluntary 999 emergency rescue service on call 24/7/365 if you would like to support their work you can donate online at www.justgiving.com/newlandrover.)
]]>