<![CDATA[ <p style="text-align: justify;">Following media attention in a running Guardian investigation into white slavery and an article on Wednesday 4 November on non-EU fishermen sailing out of Irish ports, the Irish government has launched a taskforce to address the key issues.

And Northern Ireland DARD Fisheries Minister Michelle O’Neill today also urged anyone with information about the exploitation or trafficking of migrant workers to report it to the authorities. 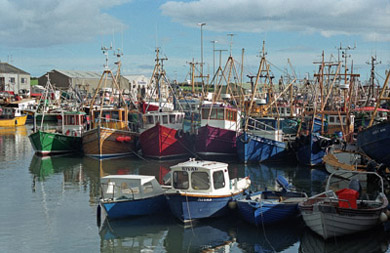 Fisheries MInisters North and South are concerned about the exploitation of non-EU fishermen.[/caption]

Responding to media reports that migrant workers were being trafficked across the island, to be used in parts of the South’s fishing industry, the Minister said: “The exploitation of migrant workers in any industry is unacceptable. As Fisheries Minister for Northern Ireland, I am disturbed at reports that non-EU workers are being exploited by unscrupulous trawler owners in some parts of the industry in the South.

“Migrant workers typically receive low wages, work long hours in cramped and unsanitary conditions and, on many occasions, fear for their safety and well-being. This cannot be tolerated.

“Today I appeal to everyone connected in the fishing industry, North and South and beyond, to be vigilant. If you have any information, bring it to the notice of the PSNI or An Garda Siochana. We each have a role to do whatever we can to prevent such cruel exploitation.”

A County Down trawler owner, who did not wish to be named, explained: “It may well be the case that a couple of boat owners and skippers have abused the system, but my understanding is that the foreign non-EU fishermen working in our ports in County Down are well looked after.  They receive the same wages and have a number of other benefits build it. But we agree with the Minister, abuse should not be tolerated.

“When Filipino fishermen first came over here, almost all were experienced and excellent fishermen. However, because of how their wages here translates into virtual riches in the Philippines, it has attracted a number of people who are not fishermen seeking places on trawlers in the fishing industry and claiming the benefits these fishermen are getting. To my knowledge all the fishermen have been put through the essential statutory training required as a matter of course.”